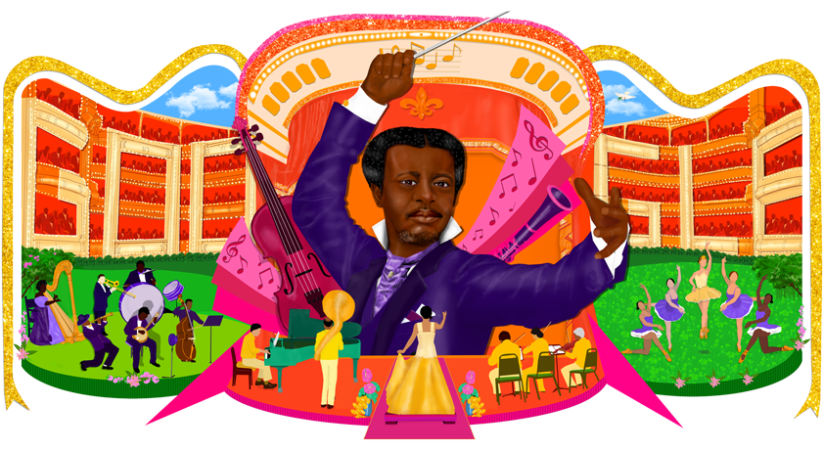 Today’s Doodle honours Creole classical musician and composer Edmond Dédé, as illustrated by Brooklyn, NY-based guest artist Lyne Lucien. One of the oldest surviving pieces of sheet music by a Black Creole composer in New Orleans is the melody of his 1851 composition “Mon Pauvre Cur” (My Poor Heart).

Dédé learned the clarinet from his father, a bandmaster in a small military band, on this day in 1827 in New Orleans, Louisiana, United States. As he grew into a musical prodigy, he switched to the violin, which quickly became Dédé’s instrument of preference. Dédé fled home for Mexico to avoid the rising racial prejudice in the American South, where he apprenticed under well-known New Orleans musicians.

In 1851, he went home and wrote “Mon Pauvre Cur.” He worked for a short time to save money before returning to France to finish his classical studies. He gained a job at the Grand Théâtre de Bordeaux in the late 1850s, where his talent flourished. He also worked at the Folies Bordelaises and the Théâtre de l’Alcazar. His ballets, operettas, overtures, and over 250 songs were hugely popular in France, but not so much in the United States. Dédé lost his treasured Cremona violin in a shipwreck in 1893 en route to his only musical appearance back in New Orleans, but he was able to obtain a replacement just in time for his performance!

Dédé’s talent drove him to become a world-class composer despite living in a time of severe racial persecution. The National Library of France and several American colleges have most of Dédé’s sheet music. His tale continues to encourage today’s classical artists to be proud of their history and to recognise the contributions of musicians from historically marginalised groups.