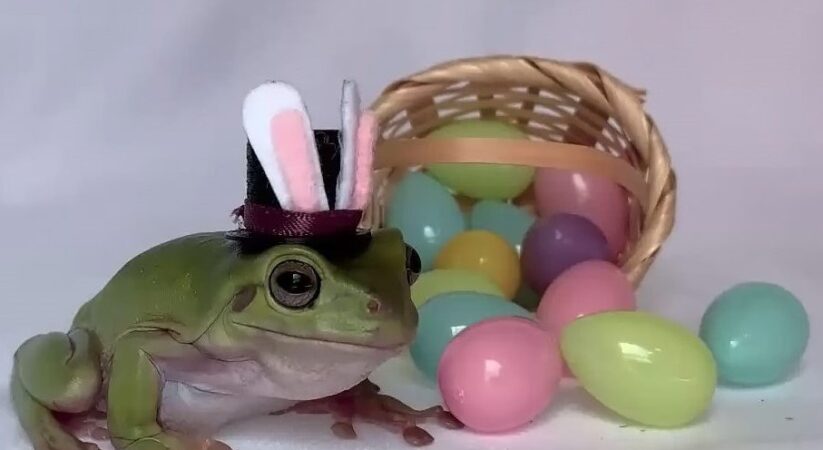 No croaks about it — that is definitely not a rabbit.

Cadbury has crowned the winner of its third-yearly Bunny Tryouts, choosing Betty the frog from Florida from 12,000 entries nationwide.

The Hershey-owned candy brand announced the news Tuesday, prodding Betty’s win as a historic leap forward. The Australian White’s Treefrog from Stuart is the first female and first amphibian to take the top prize in the Easter-themed contest.

“Betty’s been a great addition to our home and we are so glad we get to share her with the rest of the world!” glad pet parent Kaitlyn V. said in a statement. “She has been a wonderful companion at college and thanks to the support of my friends, family and the amphibian community, I know she’ll make Cadbury proud as she inherits the bunny ears.”

Hopping into the spotlight, the scrappy frog is set to star in Cadbury’s Clucking Bunny Commercial, advertising Creme Eggs on TV later this spring. Betty will likewise get a $5,000 monetary reward for her success, with the organization giving another $15,000 to the American Society for the Prevention of Cruelty to Animals in her honor.

As found in her official audition video, a narrator speaking on behalf of Betty said the frog needed to win to represent the amphibian community, and the ones who love them.

“Betty knows what it’s like to be different and she’d like the chance to show everyone that our differences are what make us who we are and they are something to be proud of,” the narrator said.

Prior to leaping to the best position, Betty was among “the most diverse 10 finalists ever,” including a frog, donkey, miniature horse and goat, Cadbury said.

Born not exactly a year prior, Betty’s first-historically speaking Easter makes certain to be an special one. The now-famous frogs is nocturnal, and enjoys spending her waking hours eating snacks, bathing in her bowl, hopping around and hanging out with her froggy friends, as indicated by the news release.