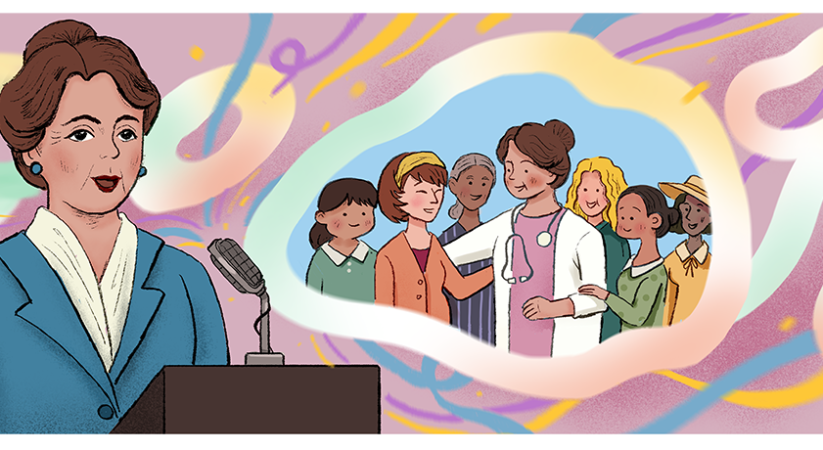 Today’s Doodle honours Dr. Elvira Rawson de Dellepiane, a notable first-wave feminist in Argentina who was also one of the country’s first female doctors, who was born on this day 155 years ago.

Rawson, who was born in Buenos Aires, grew up in a close-knit neighbourhood where affluent and poor neighbours looked out for one another. Rawson was inspired by acts of compassion that promoted economic equality when she was a child, and she was determined to leave her mark on history as well.

Dr. Rawson began early efforts to investigate reproduction from a female perspective after graduating from medical school in 1892, at a time when women’s perspectives were lacking in medical literature. Her efforts contributed to the de-stigmatization of reproductive health.

In 1910, she attended the First International Women’s Congress in Buenos Aires, where she joined forces with famous suffragists from around the world. It paved the way for women’s rights movements throughout Latin America, not only in Argentina. Dr. Rawson was one of the co-founders of the Women’s Rights Association in 1919, which organised women to seek equal pay and the right to vote. The group’s efforts, which were considered radical at the time, did not result in many actual policy changes. Nonetheless, the campaign drew the attention of major political parties and laid the groundwork for subsequent feminist movements.

Dr. Rawson was a strong advocate for children’s health and well-being throughout her career. She worked for the National Department of Hygiene and later the National Council of Education as a medical inspector, where she assisted in the establishment of school cafeterias.

Women and children in Argentina now have more chances as a result of her efforts and activities. Today we honour Dr. Elvira Rawson’s unwavering belief that a woman can—and will—accomplish anything.