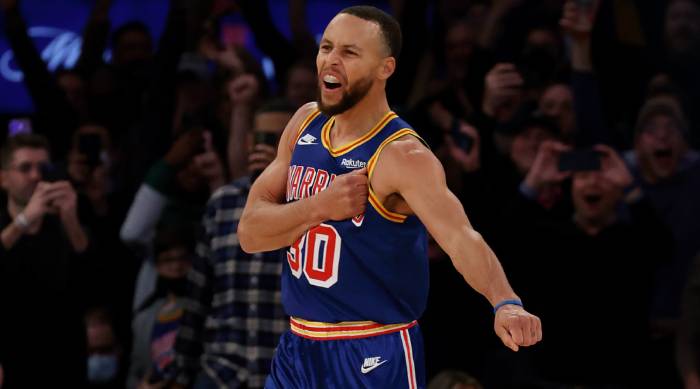 Stephen Curryis officially the greatest shooter of all time.

The Golden State Warriors’ star guard passed Hall of Famer Ray Allen for the all-time lead in 3-pointers Tuesday night against the New York Knicks, sinking his 2,974th of his career.

Curry hit a 28-footer from the right wing off a feed from Andrew Wiggins with 7 minutes, 33 seconds left in the first quarter to set the record. Curry was fouled and the Warriors called a timeout so he could enjoy the event.

As players rushed onto the floor to congratulate Curry, he was greeted with a strong hug from teammate Draymond Green. As the Madison Square Garden crowd gave him a resounding standing ovation, he took the ball in his arm and presented it to his father, Dell, on the floor. A few moments later, Curry returned to centre court for an embrace and congratulations from Allen.

After the game, Miller and Allen gave Curry a Warriors jersey with the number 2,974 on the back.

“I’ve been thinking about this number for a long time. I’ve even got it on my shoes,” Curry said on TNT. “Basketball history. This is pretty special. These two, legends. I watched them growing up and understood what it meant to shoot the ball because of them and my dad. Full-circle moment, man. I’m blessed. Blessed, for sure.”

Curry was congratulated by NBA commissioner Adam Silver in a statement made during the game.

“It was thrilling to see Steph break the NBA’s all-time record for three-pointers,” Silver said. “He has revolutionized the way the game is played and continues to leave fans in awe with his amazing artistry and extraordinary shooting ability. We congratulate him on this historic achievement.”

Over the last few weeks, Curry has tried to divert criticism of the impending record by emphasising how important the mark is to him. Those close to him say they are aware of his achievements and are proud of him.

“I can’t explain it,” Dell Curry recently told ESPN. “And I played with and against Ray, played against Reggie [Miller], I know how great shooters those guys were, but to know my son’s going to leave the game being the best — he already is the best shooter ever to play, and have that record, it’s unbelievable.”

Curry’s record-breaking performance was witnessed by Allen and Miller, who were both announcing the game for Turner Sports. Before the game, the trio exchanged a few words and a group hug, relishing the anticipation of the eventual historical occasion.

“I think people have compared him to myself and to Reggie and to other past shooters, great shooters in the NBA, but he really operates somewhat in a lane of his own,” Allen recently told Warriors beat reporters on a conference call.

Curry is the most “joyful” player he has ever seen, according to Warriors coach Steve Kerr earlier this season. While Curry’s talent has helped the Warriors win three NBA titles, players and coaches value his presence and leadership behind the scenes as much as anything else he does.

Kerr stated, “What he’s done has just completely redefined what’s a good shot.” “Redefined the point guard position, in terms of what’s expected. You can see a whole generation of young players who are playing the game the way Steph does, with shooting range and handle, all kinds of skill and joy. It’s amazing how much he’s impacted the game both strategically and artistically.”

Curry and Kerr both said after Monday’s 102-100 win over the Indiana Pacers that there would be a sense of “relief” when Curry finally broke Allen’s record, but Curry knew the weight of the record would eventually cause him to become emotional about his latest career achievement, no matter how much he tried to enjoy the moment.

When asked what it would mean, Curry said last week, “I’ll talk about it when it happens.” “You’re going to make me cry up here, bro,” says the speaker.