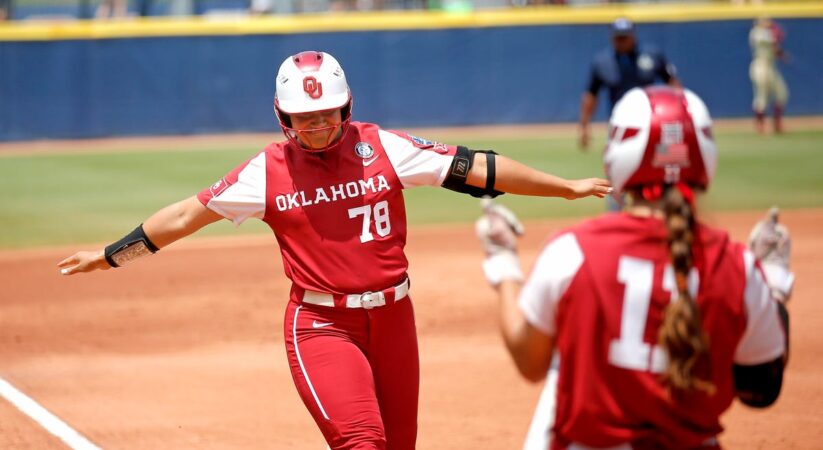 The ball popped shallowly over the infield and Patty Gasso held the netting before her perch in the dugout.

It looked like the OU’s softball coach’s legs may give out as Giselle Juarez, appropriately, clenched her glove and clinched the Sooners’ fifth national championship with a 5-1 win over Florida State at USA Softball Hall of Fame Stadium on Thursday.

Gasso should be at the ballpark Thursday, expecting rather to be in northeast Oklahoma for her son’s rehearsal dinner ahead of his Friday wedding.

In any case, end of the week climate deferrals, and misfortune in the first of the best-of-three championship series, made those plans secondary — for a piece in any event.

“I’m paying for it, but I’m not there,” Gasso said after an extended celebration with her team, a large group of her former players and plenty of Sooners fans who hung around well after the final out to soak in every moment. “I’ll be at the wedding tomorrow, so a lot of things were happening.”

Gasso might’ve been frail in the knees by the end, however there wasn’t a ton of overpowering dramatization when it went to the result when Game 3 rolled around. Jocelyn Alo blasted a first-inning home run to set the tone and put OU ahead quickly. Juarez ruled in the circle indeed, tossing a two-hitter.

There was a plenty of drama for the Sooners in this current Women’s College World Series leading up to Thursday, however.

They dropped their opener to James Madison and tournament sensation Odicci Alexander.

In winning four straight to get to the best-of-three title series, the Sooners conquered shortages against UCLA and James Madison. Sandwiched in the middle was neglecting a 3-0 lead over the Dukes slip to coming through late to stay alive.

There were long rain postponements and controversy about the schedule and calls the field and replay.

Then, at that point in the championship series, the Sooners got blasted in the opener, facing a deficit as large as they’d looked in any two games joined before that night.

Be that as it may, Gasso was not too far off in the center of it, furnishing OU with a steadying force in any event, when things weren’t going as planned.

“We’ve been battling together,” Juarez said. “That’s been kind of our thing.

“To see Coach with us, it’s just really awesome to see us do what we were trained for.”

When Gasso won her first national championship, in 2000, the Sooners were the Little Engine That Could, beating powerhouses UCLA and Arizona — which had combined to win 10 of the last 11 titles before the year — to win an improbable national title in their own backyard.

Presently, it’s OU which has become the power, winning four additional times including three of the last five.

Florida State mentor Lonni Alameda has an interesting point of view on exactly how far OU’s program has come. Alameda played for the Sooners when they played their games at Norman’s Reaves Park and OU was “getting kicked off by slow pitch teams.”

“They’ve got something special,” Alameda said of Gasso and the Sooners. “And you can see it. … This state is supporting the game, and I think that’s only a great opportunity for young girls to grow up and want to play at this level.”

Also, Alameda was on the West Coast during the Pac-12’s dominance.

“What Arizona and UCLA had back in the day now has gone coast to coast,” Alameda said. “Now the game of softball has grown.

“It’s really cool to see where the future is going to go for it.”

Gasso became to be only the second coach to win five WCWS titles as a solo coach — just incredible Arizona mentor Mike Candrea, with eight, has more.

UCLA’s tandem of Sharon Backus and Sue Enquist won three together, with Backus winning four solo before they collaborated and Enquist three solo after.

“I think these hardworking people had so much belief in this team and they felt it daily,” Gasso said. “We practiced hard. We practiced hard daily. They’ll tell you that. That’s how it all pays off. It’s just a lot of hard work and a lot of belief in our culture and our championship mindset and all that we put to work there.”