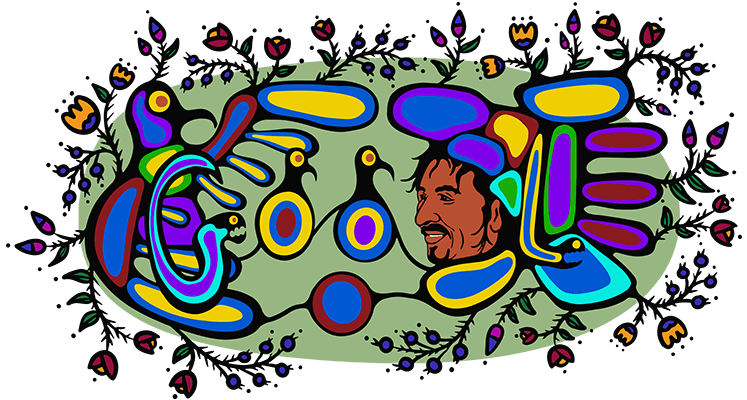 Norval Morrisseau (Copper Thunderbird), an Indigenous Canadian artist from the Bingwi Neyaashi Anishinaabek First Nation, is honoured in today’s Doodle, which was created by Anishinaabe guest artists Blake Angeconeb and Danielle Morrison. Morrisseau is widely regarded as Canada’s “grandfather” of contemporary Indigenous art, and his work cleared the path for Indigenous art to be displayed in mainstream galleries. Today, on National Indigenous Peoples Day in Canada, they honour Morrisseau and his paintings, which beautifully captured Indigenous stories.

Copper Thunderbird was Norval Morriseau’s Ojibwa name. He was born on the Sand Point Ojibwa reserve in Ontario, Canada, on March 14, 1932. His maternal grandparents reared him and instilled in him an appreciation for Anishinaabe culture and traditions. Morriseau was forced to leave his home at the age of six and attend a residential school, where traditional Native ceremonies were disallowed and indigenous languages were forbidden. Morrisseau was driven by a desire to preserve his people’s traditions, despite the trauma and hardships he had endured as a child. Morrisseau was introduced to shamanism by his grandfather, a Shaman schooled in the Midewiwin spiritual system, who also passed down Ojibwa myths and traditions.

Morrisseau began exploring ways to infuse Anishinabek oral traditions and iconography into his artwork as he grew older. In 1962, he organised an exhibition at the Pollock Gallery in Toronto, which represented his official debut in the art world and the first time an Indigenous artist was presented in a major Canadian contemporary art gallery. Woodland painting became his signature style, which featured vibrant colours, birch-bark scroll etchings, and skeletal creatures and people. Morrisseau’s work was a rare fusion of traditional Indigenous iconography and contemporary art techniques. Morrisseau’s route to success has not been easy; his work has been the subject of continuous art fraud and plagiarism charges, as many have attempted to profit off his unique style’s value.

Morrisseau’s work was featured in displays all around Canada, Europe, and the world during his multi-decade career. Moose Dream Legend (1962), Conquest of the Thunderbird (1982), Androgyny (1983), and Observations of the Astral World are just a few of his significant works (1994). Morrisseau also used his growing clout to advocate for and promote up-and-coming First Nations musicians like Daphne Odjig and Roy Thomas. He was a founding member of the Indian Organization of Seven, a group dedicated to the advancement of Indigenous artists in the future. Morrisseau has been dubbed the “Father of Contemporary Indigenous Art in North America” for his achievements.

Thank you, Morrisseau, for using art to share your Indigenous culture’s stories with the rest of the world!