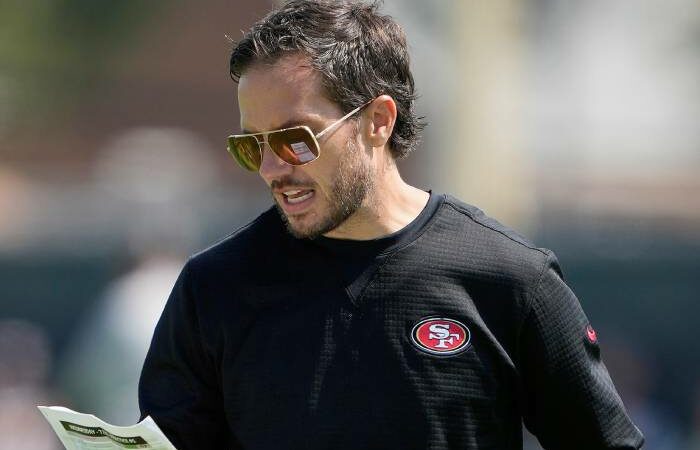 The Miami Dolphins have agreed to hire Mike McDaniel, the offensive coordinator for the San Francisco 49ers, as their new head coach, the team announced on Sunday.

According to ESPN’s Adam Schefter, the Dolphins signed McDaniel to a four-year contract.

Since the Dolphins fired Brian Flores on Jan. 10, McDaniel’s hire has been a nearly month-long quest.

Kellen Moore, the offensive coordinator for the Dallas Cowboys, was the other finalist for the job.

McDaniel, who identifies as multiracial, joins Mike Tomlin of the Pittsburgh Steelers, Ron Rivera of the Washington Commanders, and Robert Saleh of the New York Jets as the league’s only minority head coaches. According to a league official, the 49ers would receive two third-round draught picks (one in 2022 and the other in 2023) as compensation for developing a minority assistant who was chosen for an NFL head-coaching job under the Rooney Rule.

After 15 seasons in the NFL and two in the United Football League, McDaniel, 38, earns his first head coaching job at any level. After being promoted to offensive coordinator in January 2021, he lasted one season with the 49ers. The 49ers had the league’s seventh-best offence in terms of yards per game that season, and wide receiver Deebo Samuel was named an All-Pro.

McDaniel started his NFL career as an intern with the Denver Broncos in 2005, then worked as an offensive assistant for the Houston Texans under Gary Kubiak for three seasons. He spent three more seasons with the Washington Redskins as an offensive assistant and wide receivers coach, working alongside current head coaches Matt LaFleur of the Green Bay Packers, Sean McVay of the Los Angeles Rams, and Kyle Shanahan of the San Francisco 49ers.

McDaniel spent a year as a wide receivers coach with the Cleveland Browns, then two years as an offensive assistant with the Atlanta Falcons, where Shanahan was the offensive coordinator at the time. Shanahan took over as head coach of the 49ers in 2017, while McDaniel was hired as the team’s run game coordinator before being promoted to offensive coordinator last summer. The offence has ranked 11th in rushing yards throughout McDaniel’s five seasons in San Francisco, with the fifth-highest proportion of rushes of 10 yards or more.

McDaniel will be the Dolphins’ 11th head coach, interim or otherwise, since 2000, after having only three head coaches in their prior 34 years. After going 24-25 in three seasons, including two of the franchise’s seven winning seasons this century, they dismissed Flores.