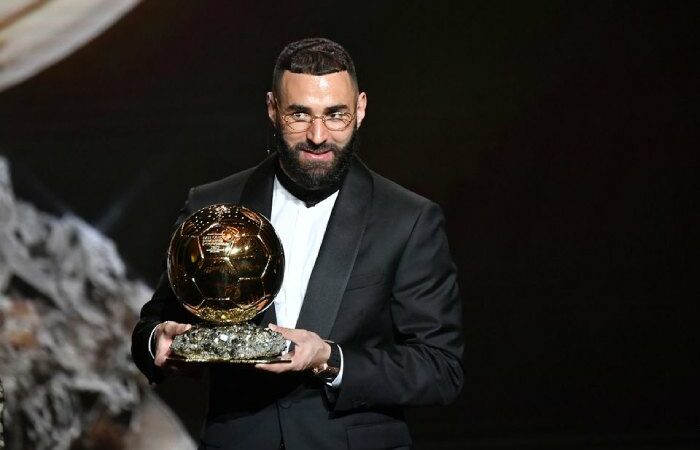 At a ceremony in Paris on Monday, Karim Benzema received the 2022 Ballon d’Or trophy. His outstanding 2021–22 campaign saw him help Real Madrid win the Champions League and LaLiga again.

The 34-year-old Benzema scored a career-high 27 goals in LaLiga and led all scorers with 15 goals in the Champions League, including hat tricks against Chelsea and Paris Saint-Germain.

He came in ahead of Sadio Mane of Bayern Munich and Kevin de Bruyne of Manchester City, who placed second and third, respectively. Kylian Mbappe of PSG finished sixth, while Cristiano Ronaldo of Manchester United placed 20th.

“I’m really proud seeing this prize, it’s been my dream since I was a kid. I grew up with this in my head, and after that I had the motivation,” Benzema said.

“I had two role models in my life: Zizou [Zinedine Zidane] and [Brazil legend] Ronaldo. It’s a lot of work; I never gave up and I kept that dream in my head. Anything is possible.

At a ceremony held at the Theatre du Chatelet in Paris, the France international accepted the award, which is given out by the magazine France Football, for the first time in his professional career.

He is the first member of the Madrid team to win the prize since Luka Modric in 2018 and the first Frenchman since 1998 honoree Zidane, who gave Benzema the trophy.

Benzema said, “I’d like to thank my teammates at Real Madrid and the national team, my president [Florentino Perez] who is like family to me, and also the Lyon academy and president [Jean Michel] Aulas, thanks to him I fulfilled my dream of playing for Real Madrid”.

When Madrid defeated PSG, Chelsea, and Manchester City in the Champions League knockout stages to win the club’s 14th European Cup, Benzema was well praised for his efforts. He scored 10 goals in those wins.

He returned to the France national team in 2021 to help them win the UEFA Nations League after a six-year hiatus, and he is anticipated to spearhead their attack in the Qatar World Cup in 2022.

Gavi, a midfielder for Barcelona, earned the Kopa Trophy earlier in the ceremony, which is given to the top player under the age of 21.

Gavi, who turned 18 in August, won the award before Jamal Musiala of Bayern Munich and Jude Bellingham of Borussia Dortmund. He succeeds fellow Barca teammate and previous winner Pedri.

Gavi made his debut with the first squad last year at the age of 16, and in 2021–2022 he made 47 appearances across all competitions for Barca while contributing two goals.

He was called up to the Spain national team as a result of his play for the Catalan club, and at the age of 17 years and 62 days, he made history by being the youngest player to ever play for La Roja.

Since then, Gavi has earned 12 caps for Spain and is a dependable player for both club and nation as the World Cup approaches next month.

In the meantime, Madrid’s Thibaut Courtois got the Lev Yashin award for best goalkeeper while Robert Lewandowski earned the Gerd Muller award for best striker of the year.

The late Brazil footballer Socrates was honoured with a humanitarian award added by the Ballon d’Or organisers. Mane received the award for his humanitarian efforts in Senegal, which included constructing a hospital and giving money to schools.