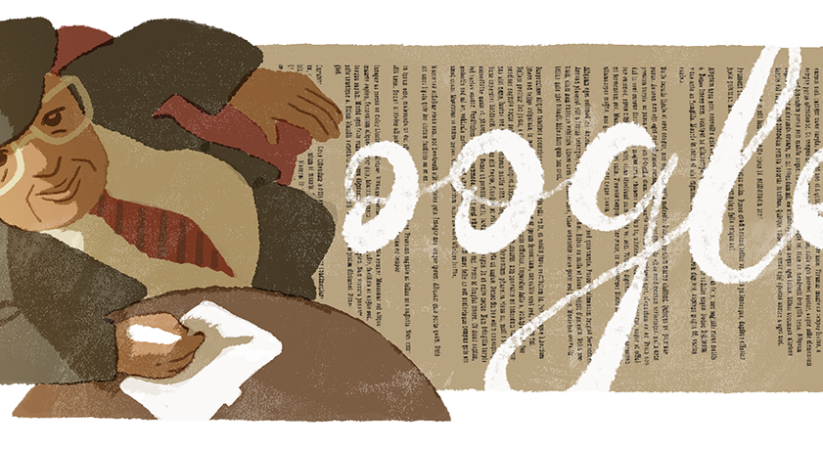 The 106th birthday of Chilean poet, diplomat, and educator Gonzalo Rojas, who won the Chilean National Prize for Literature in 1992, is celebrates in today’s Doodle. Over the course of his career, he composed and published more than forty collections of poetry, frequently focusing on words that are melodic and ear-pleasing.

Rojas was brought into the world in Lebu, Chile on this day in 1916. He received a scholarship to attend a boarding school, where he later studied literature and law at the University of Chile in Santiago. Rojas also taught miners in the Atacama Desert how to read and write while he was working on his first book of poetry. He also established and edited the literary journal Antárctica during this time.

He gained international recognition as a poet when his first collection, La miseria del hombre (The Misery of Man), was published in 1948. Throughout his seven-decade career, Rojas published numerous additional collections, including Contra la muerte (Against Death, 1964), Oscuro (Darkness, 1977), and Del relámpago (Of Lightning, 1981).

During the height of Latin American literature in the 1960s, he also worked as a lecturer and administrator at the University of Concepción, organizing seminars and conferences. Rojas was a diplomatic ambassador in the early 1970s until political tensions forced him into exile. From that point, he went to colleges in Germany, Spain, the US and more to show Spanish writing.

Rojas was able to return to Chile in 1979 thanks to a Guggenheim scholarship. He made his home in the city of Chillán, where he continued to publish notable poems. In his later years, he was awarded the Miguel de Cervantes Prize in Spain, the Octavio Paz Prize in Mexico, the José Hernandez Prize in Argentina, and the Chilean National Prize for Literature, which is the highest national literary award in Chile.