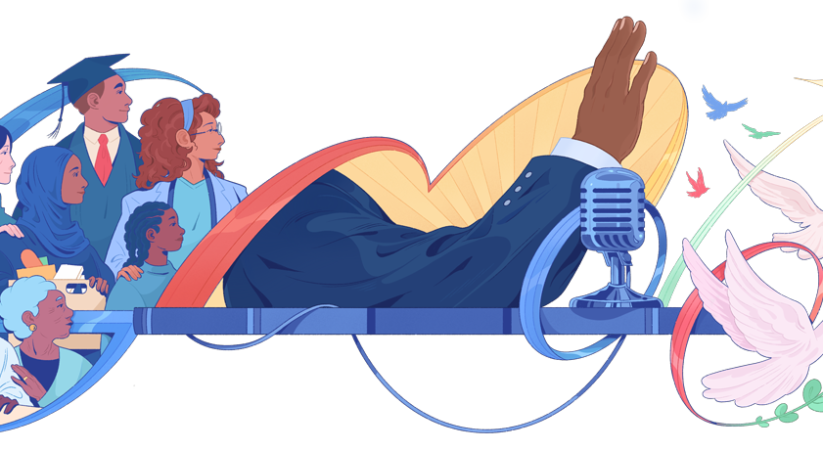 Today’s Doodle honours Dr. Martin Luther King Jr. Day and is illustrated by Olivia Fields, a guest artist from Brooklyn, New York. This federal holiday in the United States honours a day of service and meditation on the life and work of Dr. Martin Luther King Jr., a civil rights activist who campaigned for racial equality and the end of segregation throughout his life.

Martin Luther King Jr. was born on January 15, 1929, in Atlanta, Georgia. He began his service career as a pastor and community leader in the NAACP in Montgomery, Alabama, where he worked to secure legal protections for the Black population in all sectors of social and institutional life. Dr. Martin Luther King, Jr. was elected by the NAACP to fight segregation by leading a historic bus boycott in 1955. The Montgomery Bus Boycotts were the first large-scale, peaceful demonstration of their sort in the American civil rights movement, inspiring generations to struggle for civil rights.

Martin Luther King Day 2022 was proposed as a holiday shortly after his assassination in 1968. Following King’s death, US Representative John Conyers and US Senator Edward Brooke sponsored legislation in Congress to make Martin Luther King’s birthday a national holiday.

Dr. King spread his message of racial justice and economic equality via powerful protests, lectures, and writings. His efforts culminated in the passing of the 1964 Civil Rights Act, which declared the end of legalised public segregation and discrimination in the United States.

The bill was originally brought up for a vote in the US House of Representatives in 1979, but it fell five votes short of the required number. Opponents made two primary arguments: the first was that a paid holiday for federal employees would be prohibitively expensive, and the second was that a holiday to celebrate the birth (of a private citizen who had never held public office) would be counter to long-standing tradition.

After a decade, and immediately after the rejection of a bill introduced by Representative John Conyers, the attempt garnered greater attention. Stevie Wonder released a song called “Happy Birthday” in September of 1979. That was intended to make a case for the holiday, chastising those who opposed it. In addition, a petition to Congress to pass the measure received six million signatures. When President Ronald Reagan took office in 1981, he was initially opposed to the holiday.

Senators Jesse Helms and John Porter East of North Carolina Republicans were also against the holiday, questioning whether King was important enough to get such an honour and criticising King’s opposition to the Vietnam War.

On November 2, 1983, President Ronald Reagan signed a measure introduced by Indiana Representative Katie Hall to establish a federal holiday in King’s honour. On January 20, 1986, the measure passed the House of Representatives and was observed for the first time. Some states initially refused to recognise the holiday, and it was only in the year 2000 that it was officially observed in all 50 states for the first time.

Dr. King’s legacy lives on via his children’s work and the millions of others who have been inspired by his powerful speech to continue pushing the moral universe toward a more fair society for everyone.