Monday, 23 May 2022
You are here: Home WhatsApp will roll out ‘Communities,’ which will be more structured group chats with admin controls 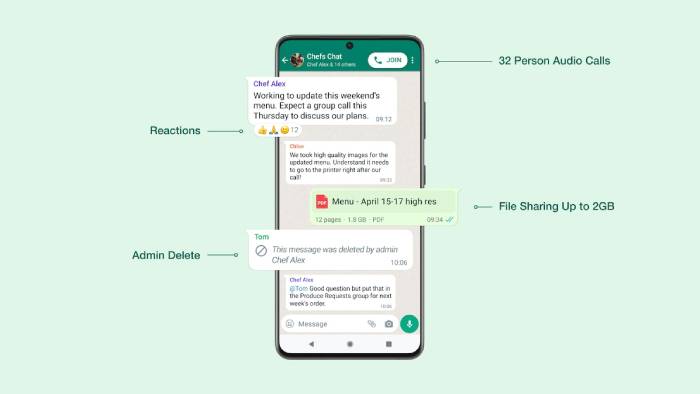 While Meta is investing billions of dollars in the metaverse as the future of social networking, in the short term, the tech giant is focusing on the potential of messaging to connect users in a more intimate way. On that front, the firm today announced plans for a major update to its WhatsApp messaging programme, which would allow users to not only interact privately with friends and family as they have in the past, but also to participate in bigger discussion groups known as Communities. These groups are intended to be a more feature-rich substitute for people’s bigger group chats, with features such as file sharing, 32-person group calls, and emoji reactions, as well as admin tools and moderation controls.

The feature has been in the works for a while as the platform’s next big update, with the goal of using the app’s existing end-to-end encryption as well as users’ growing desire to join private communities outside of larger social networks like Facebook.

Communities, in particular, could pose a threat to other messaging apps like Telegram, which has recently become a prominent player in communications related to the Russia-Ukraine conflict, as well as other private messaging platforms, such as iMessage or Signal, and group messaging apps like GroupMe, Band, Remind, and others.

“It’s been clear for a while that the way we communicate online is changing,” Meta CEO Mark Zuckerberg wrote in a public Facebook post announcing the development. “Most of us use social networks and feeds to discover interesting content and stay updated. But for a deeper level of interaction, messaging has become the center of our digital lives. It’s more intimate and private, and with encryption it’s more secure too,” he added.

A volunteer organisation, for example, could develop a sub-group conversation for people working on a specific issue, such as a food drive. Sub-groups based on the ages of their children could be formed by a parent group. Sub-groups for different grades or extracurricular activities could exist within a school. Sub-groups could be formed to plan the club’s various events and activities. And so forth.

But while Facebook Groups may see some overlap with WhatsApp Communities, the two are not designed for the same purpose. Larger, otherwise unconnected strangers who share a common interest frequently use Facebook’s product. WhatsApp Communities, on the other hand, focuses on more private and personal groups, including those where members are already connected in other ways, such as in person.

“When you’re interacting with people on WhatsApp, there’s a necessary comfort with exchanging your phone number with them. So that points towards communities where you know these people in real life,” he says. “Maybe you don’t have every phone number of every parent in your kid’s class, but you’re comfortable interacting with them in that way.”

Users will be able to view the phone numbers of people who are in their sub-groups with them, or when they engage with each other one-on-one, in Communities. This gives the product a more personal feel than Facebook Groups, for example.

Another important distinction between Communities and Facebook Groups is that the latter contains public or discoverable groups on the network. WhatsApp Communities are none of these things. Users will not be able to search for or discover Communities on the service, according to the business. To join the groups, you must first be invited.

“What we’re doing now is starting to build for organisational use cases with intention,” he explains.

Admins can add members to Communities individually or post an invite link to build their groups. Admins have the power to remove individual members from a Community as needed, which is useful for clubs and other groups where members come and go.

Furthermore, only administrators will be able to share notifications with the entire Community via the main announcement group (as it’s known), which will initially support “several thousands” of people. Members of the community can only chat in the smaller groups that the administrators have created or approved.

WhatsApp will also limit forwards, a method of sending messages that is frequently used to spread misinformation and spam. Messages that have already been forwarded to five groups will only be allowed to be forwarded to one group at a time in Communities, rather than the current restriction of five.

This, combined with subgroups, could help to solve the problem of overload that plagues many group conversations today, where critical information is lost in the shuffle of discussion and irrelevant content.

While WhatsApp touts its end-to-end encryption as another reason to utilise the new conversations feature, it still faces user resistance due to problems with its most recent attempt to update its privacy policies. Last year, the business received blowback for a difficult-to-understand policy update, which is still being examined by anti-trust authorities and regulatory agencies in various areas, including the EU and India.

According to Cathcart, a “large, overwhelming percentage of the user base” approved the change after WhatsApp clarified its rules. Anyone who refuses will be unable to use the new business-related functions. Communities will not require another policy modification at this time, he says.

“This fits very closely with what we’ve been doing before. And from a data perspective, this is all end-to-end encrypted on the communications — [it] works very similar to how groups have worked,” he says.