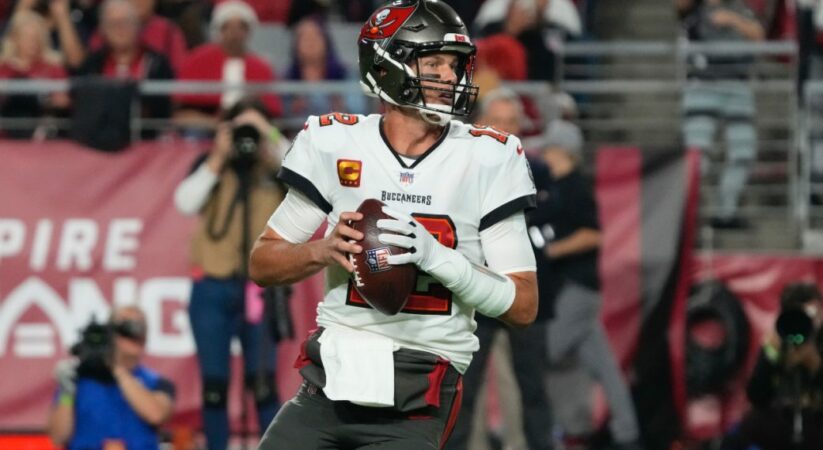 It occurred in a game in Week 18 that had no effect on playoff positioning and involved a straightforward 5-yard out throw to wide receiver Russell Gage.

Even though the Tampa Bay Buccaneers lost to the Atlanta Falcons 30-17 in their regular-season finale on Sunday, the significance of quarterback Tom Brady breaking yet another NFL record in his 23rd season at the age of 45 cannot be overstated.

In a game that many questioned Brady’s participation in given the possibility of injury, Brady broke his own NFL single-season completion record of 485 with that pass to Gage. He finished the regular season with a total of 490 completions.

He still defies time. Coach Todd Bowles made a joke, “Father Time is having a heck of a time with Brady.” He works hard. He enjoys playing the game. He appears to be a young child out there. He enjoys competing. Everything else has been said before.”

“Just to be able to witness greatness, see him work every day, and see him want to play in this game even though we clinched a playoff spot — it just shows you the type of person, the type of athlete he is, and I respect everything about him.” Devin White, an inside linebacker, added.

With four minutes left in the second quarter, Brady left the game and was replaced by backup Blaine Gabbert. Brady had completed 13 of 17 passes for 84 yards and a touchdown, an 8-yard pass to tight end Kyle Rudolph. Kyle Trask, the team’s third-string quarterback, took over with 8:07 left in the fourth quarter.

The objective was to maintain the offensive rhythm that the Buccaneers had established last week, which they did by scoring a touchdown on their first possession for the third time this season. They also wanted to get as many starters out of the game as possible to avoid taking unnecessary risks.

Brady stated, “I was just trying to play as long as I could, but we just had so many injuries and people just going in and out.” It’s hard. You want to provide opportunities for other people to play. This past year, I played a lot. It was nice to see Blaine play and throw a touchdown. It was nice to see Kyle play a little. All of those are positives.”

Brady’s first losing season in his professional career was clinched by Sunday’s defeat, which dropped the Buccaneers’ record to 8-9. Before this season, Brady had won 21 straight regular season games with the New England Patriots and Tampa Bay.

Despite the fact that the score was 10-10 when he left the game, it was also his first defeat against the Falcons. He had gone 11-0 against Atlanta in his career, including the 34-28 victory over the Falcons in Super Bowl LI. The Patriots came back from a 28-3 deficit, led by Brady.

Given that winning has defined his entire career, does it matter to him to enter the playoffs with a losing record? Yes. The Buccaneers join the 2010 Seattle Seahawks (7-9), 2014 Carolina Panthers (7-8-1) and 2020 Washington Football Team (7-9) as the only teams in NFL history to win their division with a losing record.

However, what follows is even more significant to him. In the 2007 regular season, when the Patriots went 16-0 but lost to the New York Giants in Super Bowl XLII, he already reached perfection.

“We have endured combat. We played some difficult games. We have returned from some, but not others. Brady stated, “Close won’t be good enough for anyone going forward.”

According to Brady, “I was a member of teams that were really good but didn’t make it very far and with teams that were fighting really hard and made it a long way.” Therefore, everything we do will be influenced by our actions here in the future.

Brady is preparing for his 14th straight postseason after leading the Buccaneers to their first consecutive division title with 4,694 passing yards, which ranks sixth in his career. He also scored 25 touchdowns.

After retiring for 40 days in the offseason, Brady set other records this season, including the most game-winning touchdown drives, which he accomplished in Week 9 against the Los Angeles Rams with his 55th. He became the first quarterback in NFL history to win three games outside of the United States in Week 10. After leading the Buccaneers to a 13-point victory over the New Orleans Saints in Week 13, he also set a record for the most fourth-quarter comebacks (44) in NFL history.

“These are all team records, in my opinion,” Brady said. “I’ve always said that. I don’t catch one ball. I think I caught one or two in my career. [In Seattle] … that one stunk. I’ve had a few of those that didn’t go well at all. And maybe one or two that went OK. Those are hard to come by.”