Wednesday, 1 February 2023
You are here: Home This weekend, SpaceX will launch 3 rockets from 3 different launch pads in three days 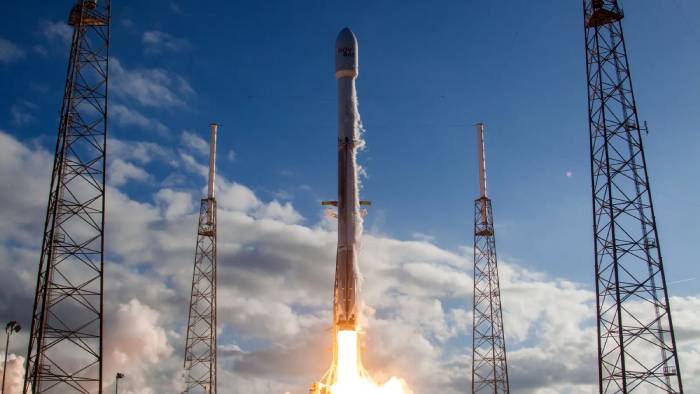 SpaceX is preparing for what may be a hat trick of rocket launches this weekend.

Starting on Friday (June 17), SpaceX plans to launch three rockets from three different launch pads in three days, beginning with the launch of 53 Starlink internet satellites into orbit from NASA’s Kennedy Space Center in Florida’s Pad 39A. On Saturday morning, a launch from California’s Vandenberg Space Force Base will orbit a radar satellite for the German military, with the third mission returning to Florida’s Cape Canaveral Space Force Station to launch a commercial communications satellite.

If successful, the launch triple-play might be SpaceX’s closest back-to-back flights yet, following three missions between January 31 and February 3 this year. With one of the launches, SpaceX hopes to achieve a new record.

When the Falcon 9 rocket named Starlink 4-19 lifts off from Pad 39A on Friday, it will be making its 13th flight, the most of any Falcon 9. The launch time has been set for 12:08 p.m. EDT (1608 GMT). According to SpaceX, the Falcon 9 first stage has performed nine Starlink missions and four commercial flights.

Elon Musk, the CEO of SpaceX, stated the company’s latest workhorse, the Falcon 9, Block 5 variant, was meant to fly up to ten flights when he debuted it. According to a story published on June 10 by Aviation Week, the company now plans to launch the Falcon 9 rocket at least 15 times before retiring it. According to the magazine, SpaceX presently has 21 Falcon rockets in its stable.

Falcon 9 flight components are now tested up to four times their fatigue life for 15 missions, according to Jessica Jensen, SpaceX’s vice president of customer operations and integration, who spoke to Aviation Week’s Irene Klotz.

If Friday’s launch goes properly, SpaceX will launch SARah 1, a synthetic aperture radar remote sensing satellite for the German military developed by Airbus, from its launch pad at Vandenberg Space Force Base in California. Saturday’s launch is scheduled for 10 a.m. EDT (1400 GMT) (June 18).

“SARah is a new operational reconnaissance system consisting of several satellites and a ground segment, which was developed on behalf of the German Bundeswehr,” Airbus said in a statement. “As the successor system, it replaces the SAR-Lupe system currently in service and offers significantly enhanced capabilities and system performance.”

According to Spaceflight Now, once SARah 1 is in orbit, SpaceX’s focus will shift back to Florida, where the company expects to launch the Globalstar FM15 communications satellite for Globalstar. On Sunday, June 19, at 12:30 a.m. EDT (0430 GMT), the mission will launch from SpaceX’s pad at the Cape Canaveral Space Force Station.

According to Spaceflight Now, Globalstar FM15 is a spare satellite for Globalstar’s communications and data relay satellite network.

At launch time, you’ll be able to watch all three of SpaceX’s forthcoming launches on Space.com. Starting about 10 minutes before liftoff, SpaceX is planned to provide live webcasts.