Wednesday, 1 February 2023
You are here: Home This week, the strawberry moon of June will shine brightly in the sky 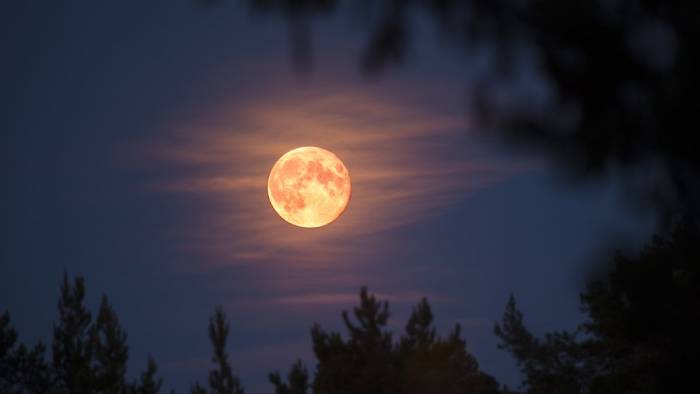 This week, the strawberry moon, June’s full moon, will shine brightly in the sky.

According to NASA, the moon will be full from Sunday moonrise to Wednesday moonset. It will peak at 7:52 a.m. ET on Tuesday, but will not be completely visible until moonrise in North America. The strawberry moon this year is the first of two supermoons in a row.

Although there is no universal definition, a supermoon is a full moon that seems brighter and larger than ordinary moons due to its close proximity to Earth.

To the casual observer, the supermoon may appear to be the same size as regular moons. According to Noah Petro, chief of NASA’s Planetary Geology, Geophysics, and Geochemistry Lab, the obvious change in brightness improves visibility and provides a fantastic chance for people to start paying attention to the moon and its phases.

According to Jacqueline Faherty, an astrophysicist at the American Museum of Natural History, the best time to stare at the moon is when it is rising or setting because that is when it seems the largest to the naked eye. (You can use the calculation in the Old Farmer’s Almanac to find out what time the moon rises and sets in your area.)

The southern half of the country and the Southwest will have the best views of the full moon in June. Early this week, a series of weak storms will move through the Northeast and Great Lakes regions, causing hazy conditions that will make getting a clear view difficult, according to meteorologist.

Moongazers should look for a clean horizon and avoid regions with large buildings and dense forestry, according to Petro. For best visibility, he also advises people to avoid bright lighting if at all possible.

The name strawberry moon comes from the beliefs of Indigenous peoples in the Northeastern United States, such as the Algonquin, Ojibwe, Dakota, and Lakota, who interpreted the celestial event as a sign that strawberries and other crops were ripe and ready to harvest. According to The Old Farmer’s Almanac, the Haida people refer to the moon as the berries ripen moon.

This moon is known as the honey moon or mead moon in Europe, and ancient documents from the region indicate that honey was ready to harvest at the end of the month. Honey moon could also be a reference to June’s status as a popular month for weddings.

This full moon occurs on Vat Purnima, a Hindu festival in which married women fast and tie a ceremonial thread around a banyan tree in order to pray for a long life for their spouse.

This moon is known as the Poson Poya moon by Buddhists, and it is named after the feast celebrating the arrival of Buddhism to Sri Lanka in 236 BC.

According to The Old Farmers’ Almanac, there will be six more full moons in 2022:

These are the names given to the monthly full moons in popular culture, but the significance of each one varies among Native American tribes.

Eclipses of the lunar and the solar

According to The Old Farmer’s Almanac, there will be one more total lunar eclipse and a partial solar eclipse in 2022.

When the moon crosses in front of the sun but only blocks a portion of its brightness, a partial solar eclipse occurs. Solar eclipses should be viewed securely with eclipse glasses, as the sun’s light can be harmful to the eyes.

On November 8, between 3:01 a.m. ET and 8:58 a.m. ET, a total lunar eclipse will be visible for people in Asia, Australia, the Pacific, South America, and North America, however the moon will be setting for those in eastern North America.

Take a look at the remaining meteor showers that will reach their peak in 2022:

If you live in a city, you might want to drive to a location where there aren’t as many city lights to get the finest view.

Look for an open area with a clear view of the sky. Make sure you’re sitting in a chair or on a blanket where you can see straight up. Allow your eyes to adjust to the darkness for 20 to 30 minutes without looking at your phone or other devices, so the meteors will be easier to spot.