Saturday, 25 June 2022
You are here: Home The Mega Artemis moon rocket will be displayed on the launchpad on June 6th 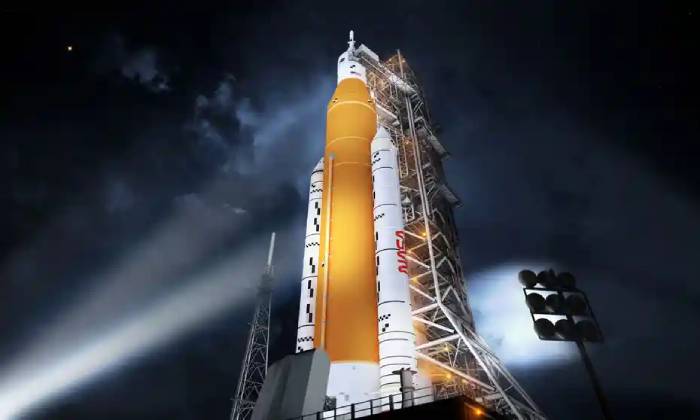 According to a NASA report released on Friday, the Artemis I mega moon rocket is preparing for its latest attempt at a last prelaunch test.

On June 6 at Kennedy Space Center in Florida, the NASA team will roll the 322-foot-tall (98-meter-tall) Artemis I rocket stack, which includes the Space Launch System and Orion spacecraft, back to the launchpad. The deployment is expected to take around 12 hours to complete.

The Artemis rocket will attempt a wet dress rehearsal for the next time no later than June 19. Because June in Florida may bring a lot of surprise thunderstorms, the NASA crew will keep a close eye on the weather and change the dates as needed.

The wet dress rehearsal, also known as the dry run, simulates every stage of launch without the rocket ever leaving the launchpad. This involves loading supercold propellant, performing a full countdown simulation, resetting the countdown clock, and draining the rocket tanks.

The rocket stack was hauled back into the Vehicle Assembly Building on April 26 after three tries at the wet dress rehearsal in April to resolve concerns that arose during the tests.

According to Cliff Lanham, senior vehicle operations manager at NASA’s Exploration Ground Systems Program, engineers have replaced and tested a check valve on the upper stage and corrected a small leak within the tail service mast umbilical used during fuelling since then.

Meanwhile, Air Liquide, the company that supplies the launchpad with gaseous nitrogen, has modified and tested its pipeline layout in order to better support the testing and launch of Artemis I.

The Artemis team also completed several work that were supposed to be completed after the next wet dress rehearsal.

Artemis I will be launched to the moon between July 26 and August 9, August 23 to August 29, September 2 to September 6, and beyond, according to the mission team.

The Artemis rocket stack will wheel back into the building after its wet dress rehearsal to await launch day.

The hard process of testing new systems before launching a rocket has a long history, and the Artemis crew is encountering difficulties similar to those faced by the Apollo and shuttle period teams, including repeated test attempts and delays before launch.

The outcome of the wet dress rehearsal will determine when the uncrewed Artemis I will launch on a mission that will take her beyond the moon and back to Earth. This mission will kick off NASA’s Artemis programme, which aims to return humans to the moon by 2025, with the first woman and person of colour landing on the lunar surface.