Monday, 28 November 2022
You are here: Home ‘The Masked Singer’ Discloses Identity of the Hydra: Meet the Stars Behind the Mask 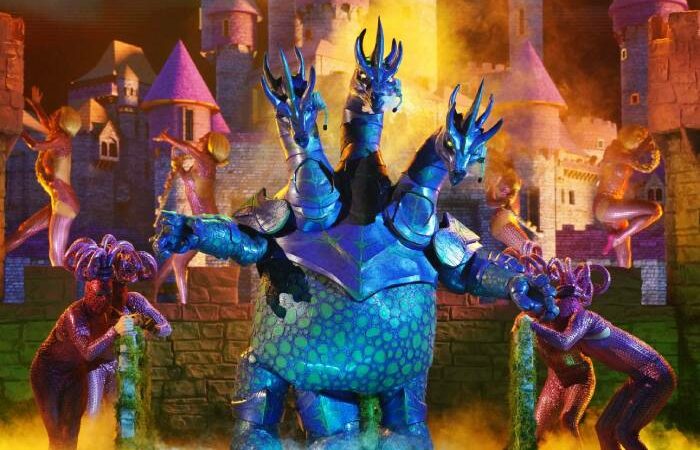 That wasn’t a trick of the light; it was true Vegas legends. On Wednesday night’s edition of “The Masked Singer,” Penn and Teller were revealed. Under the three-headed Hydra suit, Penn Jillette and his quiet sidekick Teller were camouflaged. (To see the unmasking, scroll below.)

Teller sang the majority of the songs in two separate voices, one as himself and the other as an aristocratic-style voice akin to Rex Harrison’s in “My Fair Lady.” (In reality, the voice was given the moniker “Rex” by the partnership.)

Teller is famously silent during all Penn & Teller engagements, so it’s possible that this will be the only time you hear him speak. Because Jillette’s booming voice is so known, the decision was taken to have Teller perform the majority of the songs, according to Jillette — who naturally talked solo with Variety.

“My voice is so damaged from years of being carny trash that I have just one voice,” Jillette explained. “I have no ability to change my voice even slightly. I do sound like me and I do talk a lot, so our strategy was to have Teller do most of the singing, so that those voices, which nobody knows, would be the ones you concentrated on. We also picked songs that we figured wouldn’t pin our age.”

Why did the two decide to take part in “The Masked Singer”? “When someone calls up, we answer the phone, ‘Yes,’” Jillette said. “We are the longest running Las Vegas headliners in history. And we’re we’ve put about a quarter billion people into our theater here in the Penn & Teller theater. And we do that by people seeing us on TV. So we love doing all sorts of things on television, and we are not very picky.”

But “The Masked Singer” stood out, he said, because “this is so playful and so good natured and so sweet that it really wasn’t even an instant of hesitation to go on the show. I like the kindness of this show. So many of your competition shows seem to revel in some sort of unnecessary leanness, and this show is just happy.”

How did it feel to be inside the costume? He described it as “It was fucking hell.” “But Teller and I have spent our time hiding in little spaces with each other. We’ve been crammed behind mirrored cabinets and tiny miserable places our entire career! The tapping of the foot was excruciating to me. It’s the most elaborate suit they’ve ever done. We were just inches from falling down any second.”

Hydra was voted off after doing ZZ Top’s “Sharp Dressed Man,” while Penn and Teller did Train’s “Hey Soul Sister” the week before. The “mega clue” for this week pretty much revealed their identity: it was a deck of cards, which was a dead giveaway for the Vegas magicians. “How very curious, a deck of cards that’s all jokers!” Hydra remarked.

If Hydra had kept performing “The Masked Singer,” Penn & Teller would have moved on to Culture Club’s “Karma Chameleon.” Jillette continued.

Hydra and Armadillo competed in a duel to see who would be unmasked while playing “Walkin’ the Dog” by Rufus Thomas (Armadillo) and “Two Princes” by Spin Doctors (Hydra).

Penn & Teller as Hydra joins Christie Brinkley as the Lemur, Jorge Garcia as Cyclops, Jordan Mailata as Thingamabob, Duff Goldman as McTerrier, and Joe Buck as the Ram on the list of unmasked celebrities.

So far, the finale has been planned for Firefly (“Team Good”).

Another change this season is that the show’s panellists don’t appear to be fighting for the “Golden Ear” award based on their first impressions of each masked artist (which McCarthy has won twice, but Scherzinger won last season).

On night five, the contenders and their performances were as follows:

Song: “Super Bass,” by Nicki Minaj
Voiceover: “It was awesome to hear the crowd going wild for my first performance. Team Good is ready to take this all the way, and fool the panel every week.”
Mega clue: Guitar and guitar pick with “90s” written on it. “You should know that I’m a ‘90s chick, but I’ve been songwriting as long as I can remember.”
Panel guesses: Taylor Swift, Olivia Rodrigo, Alanis Morrissette, Zara Larson
Previous song: “The Climb,” by Miley Cyrus
Previous panel guesses: Olivia Rodrigo, Kacey Musgraves, Kelly Clarkson

Song: “I Fought the Law,” by the Bobby Fuller Four
Voiceover: “I will protect the Good with my life! That’s what I do for a living, I kick butt. I can’t wait for the next song because whatever comes my way, I was born ready!”
Mega clue: Keys and a motorcycle, while “Leader of the Pack” played. “So Nick, you’re the one who took my keys to the wild hog! It’s a shame these guys had to walk my bike out. Looks like it’s dead.”
Panel guesses: Gary Busey, Jay Leno, William H. Macy
Previous song: “Secret Agent Man,” by Johnny Rivers
Previous panel guesses: Chuck Norris, Erik Estrada, Vin Diesel

Song: “Tell Me You Love Me,” by Demi Lovato
Voiceover: “I’m going to slow things down a little bit, get some feelings in there… My whole purpose of being here is to make people smile. I really do want America to have a hug because we’ve been through so much together. Some people will know my voice, some people won’t. But for me as an artist, no one’s going to expect me to be singing these songs.”
Mega clue: Grammy. “Winning a Grammy was one of the greatest moments of my career. For me, once I was afraid, I was petrified. Sometimes you have to go through life without anyone by your side. But you learn how to get along and you learn how to survive.”
Panel guesses: Gloria Gaynor, Jennifer Hudson, CeCe Winans
Previous song: “Tell It to My Heart,” by Taylor Dayne
Previous panel guesses: Lauryn Hill, Vanessa Williams, Jill Scott, CeCe Winans, CeCe Peniston, Loretta Devine