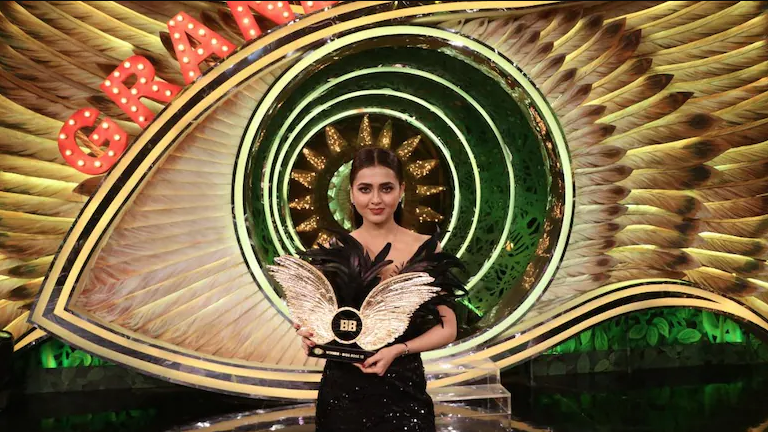 Ms Prakash, who is most known for her role in “Swaragini – Jodein Rishton Ke Sur,” won the Bigg Boss trophy and a monetary award of Rs 40 lakh.

Tejasswi Prakash entered the show as a title favourite because to her fame as a television personality.

The 28-year-old actress was known for her competitive and tenacious nature. Ms Prakash fell in love with Mr Kundra during the course of the show, and the duo became a fan favourite.

Mr Sehajpal, who was a finalist on last year’s “Bigg Boss OTT,” was also a fan favourite throughout the show.

Deepika Padukone, along with co-stars Ananya Pandey, Siddhant Chaturvedi, and Dhairya Karwa, promoted her next film “Gehraiyaan” at the grand finale.

Shehnaaz Gill, a finalist on “Bigg Boss” 13, paid tribute to her late boyfriend Sidharth Shukla, the season’s winner, among the highlights of the finale. Last year, Sidharth Shukla passed away.

Ms. Gill and Mr. Khan were visibly moved and shared an embrace in memory of Sidharth Shukla. Khan requested Kleenex from the “Bigg Boss” team at one point because he and Ms Gill couldn’t hold back their tears.

Mr Khan, who has always admired Ms Gill, said she and Sidharth Shukla’s mother had been through a difficult time.

“I keep talking to Sidharth’s mom. It’s time to move on. You have a bright, beautiful future ahead. Do lots of good work and be happy ” He informed Ms. Gill.