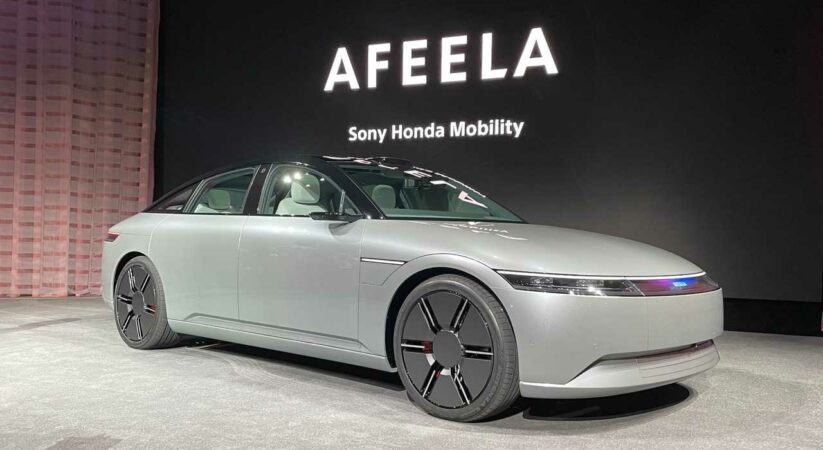 The name of Sony and Honda’s new car brand has been revealed, following their announcement last year of a joint venture to develop and manufacture electric vehicles. Afeela will be the name of it.

Yasuhide Mizuno, CEO of Sony Honda Mobility, showed off a prototype of the company’s first car at a presentation at the Consumer Electronics Show. It looked like a mid-sized sedan, but he didn’t say much about it. He stated that the vehicle will be available for order and even purchase in 2025, but that the first deliveries would not occur in North America until 2026. One of Honda’s factories will produce the automobile.

Mizuno stated, “At the heart of this mobility experience is the word ‘feel’,” stating that people sensing and interacting will be the primary focus.

According to Mizuno, Sony will provide the vehicle with entrainment and interactive features, as well as safety and driver assistance systems from Honda. He stated that the car’s development has placed a greater emphasis on software and user interface technology than on driving dynamics and performance.

A narrow exterior display screen that the company refers to as the media bar extends above the front bumper of the vehicle. Mizuno stated that it will enable the vehicle to display information and interact with individuals outside of the vehicle.

The company is designing the vehicle’s interfaces inside using Epic Games’ Unreal Engine graphics technology. Fortnite is developed by Epic Games. The technology from Unreal Engine has also been used by other automakers, like General Motors, which used it in the Hummer EV. He stated that the vehicle will include numerous entertainment options.

In addition, Mizuno boasted about the 45 cameras and sensors inside and outside the vehicle. Some of these sensors are used to determine the state of the driver to help ensure that they are alert and safe.