Wednesday, 1 February 2023
You are here: Home Rob Gronkowski of Tampa Bay Buccaneers is retiring from NFL once more 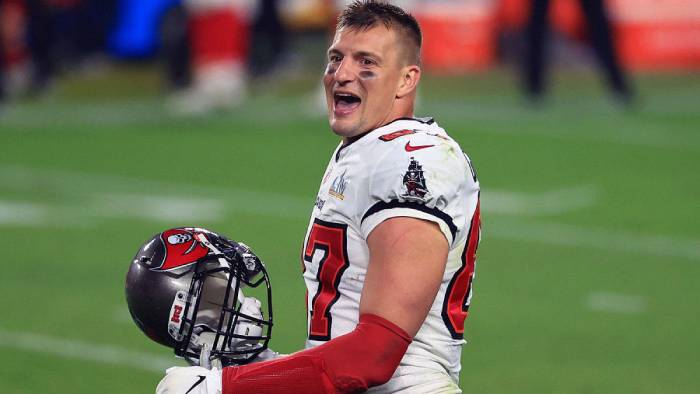 Rob Gronkowski, a tight end for the Tampa Bay Buccaneers, has decided to retire once more.

Gronkowski, 33, made his retirement known on social media on Tuesday.

In his statement, Gronkowski said, “I want to thank the whole entire first class Buccaneers organization for an amazing ride, trusting me to come back to play and help build a championship team.” “I will now be going back into my retirement home, walking away from football again with my head held high knowing I gave it everything I had, good or bad, every time I stepped out on the field.

“The friendships and relationships I have made will last forever, and I appreciate every single one of my teammates and coaches for giving everything they had as well. From retirement, back to football and winning another championship and now back to chilling out, thank you to all.”

However, Gronkowski’s agent told ESPN’s Adam Schefter that he wouldn’t be shocked if Tom Brady of the Buccaneers could persuade his client to come out of retirement once more.

Drew Rosenhaus told Schefter, “I wouldn’t be surprised if Tom Brady phones him during the game to ask him to come back, and Rob answers the call. I wouldn’t be shocked if Rob returned during the current season or the following season, but that’s just my opinion.

Due to injuries, Gronkowski previously announced his retirement from the New England Patriots following the 2018 season. The Arizona Cardinals second-round selection pick in 2010 attributes a major part of his career’s expectations to Brady, who also encouraged him to come out of retirement in 2020 to play for the Bucs.

Brady was analytical and intense, but Gronkowski was lively, fun-loving, and never known to have a bad day by coaches or teammates. Despite their vastly different personalities, they grew close both on and off the field.

“Even more important is the person he was off the field. Focused when he had to be, and FUN the rest of the time. Having Gronk in your locker room was every NFL [player’s] dream. I’m proud of all that we’ve accomplished together, and even more excited for all you have ahead of you. Congrats Gronk, you deserve it.”

Gronkowski’s breakthrough season came in 2011, when he scored 17 receiving touchdowns, breaking the NFL record. The “Gronk Spike,” in which Gronkowski violently slapped the ball onto the field after each touchdown he scored, became renowned as his signature move the previous season.

With the Patriots (XLIX, LI, and LIII) and the Buccaneers (LV) in 2020, Gronkowski won four Super Bowls. In that game, he scored two touchdowns, or “tuddies,” as he liked to call them.