Saturday, 4 February 2023
You are here: Home NASA’s CAPSTONE Mission launches to the Moon 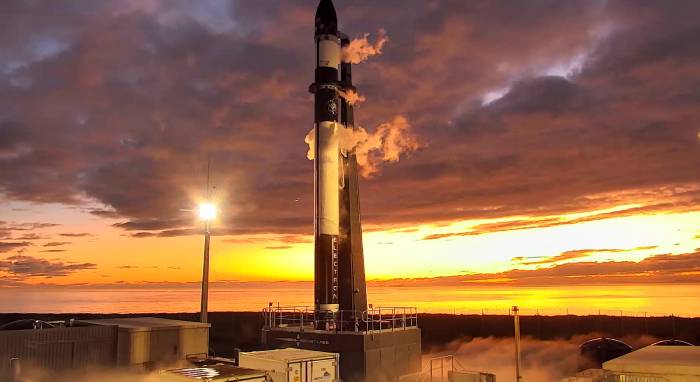 The long, historic journey to the moon has begun for NASA’s little CAPSTONE spacecraft.

Bradley Smith, NASA’s director for Launch Services Office, who was present for the moonshot at night, said, “The launch was absolutely fantastic.”

CAPSTONE will test the stability of the orbit that NASA intends to employ for its Gateway space station while travelling to the moon. But CAPSTONE won’t arrive at its target for some time.

The Apollo missions took around three days to reach the moon. These well-known spacecraft, however, were launched from Earth by NASA’s Saturn V rocket, the most potent launch vehicle ever.

Contrarily, the 59-foot-tall (18-meter) Electron, which is used to launch tiny satellites into Earth orbit, carried the microwave-sized CAPSTONE (short for “Cislunar Autonomous Positioning System Technology Operations and Navigation Experiment”) away from our planet. As a result, CAPSTONE chooses the scenic route.

CAPSTONE is a payload on Rocket Lab’s Photon spacecraft bus, which was placed into the upper stage of its two-stage Electron rocket. Photon and CAPSTONE separated from the upper stage and entered low Earth orbit around nine minutes after launch on this day.

A Perfect Electron launch! Peter Beck, the CEO of Rocket Lab, posted an update on Twitter. “Lunar photon is in Low Earth Orbit.”

Through a series of engine runs over the following five days, Photon will progressively raise its orbit. Photon will make one last burn six days after launch to enhance its speed to 24,500 mph (39,500 kph), which will let it to leave Earth orbit and travel to the moon. Representatives of Rocket Lab stated in a mission press kit that Photon will deploy CAPSTONE in less than 20 minutes after that burn.

Over the coming months, CAPSTONE will periodically fire its own thrusters to maintain it on an effective, low-energy course for the moon. The cubesat will go up to 810,000 miles (1.3 million kilometres) from Earth before gravity pulls it back. This is more than three times the distance between the Earth and the moon.

Finally, on November 13, CAPSTONE will enter a fascinating but uncharted region of space known as a near rectilinear halo orbit (NRHO) around the moon. The Colorado-based Advanced Space is in charge of NASA’s $30 million mission.

Building a path for Gateway

This orbit should be very stable, according to mission engineers: Because the gravitational pulls of the moon and Earth are balanced, spacecraft shouldn’t need to expend much fuel to stay in the NRHO, according to researchers. This is one of the main reasons NASA chose it for the Gateway space station, a crucial component of the organization’s Artemis lunar exploration mission. Missions to the lunar surface, both crewed and uncrewed, will depart from Gateway. In late 2024, NASA plans to launch the main components of the tiny moon-orbiting colony.

However, since a lunar NRHO has never been inhabited by a spacecraft, assumptions concerning its stability are just that—assumptions. And CAPSTONE steps in to help with that. The cubesat will examine the NRHO for at least six months to determine its properties.

In a video shown during NASA’s launch webcast, Nujoud Merancy, NASA’s chief of the exploration mission planning office at the Johnson Space Center in Houston, explained why the spacecraft is in this orbit: “The reason we’re in this orbit is it’s incredibly stable, but also relatively close to the moon.”

With CAPSTONE as the sort of pathfinder, it can demonstrate the navigation, the guidance, the propulsive capability to maintain the orbit, and we can really just extract from that the math to validate the orbits for Gateway, Orion and Artemis missions,” Merancy said.

According to a press release from Rocket Lab, the CAPSTONE mission “will also demonstrate innovative navigation solutions, including spacecraft-to-spacecraft navigation and one-way ranging capabilities with Earth ground stations.”

In conjunction with NASA’s Lunar Reconnaissance Orbiter, which has been orbiting the moon since 2009, the spacecraft-to-spacecraft tests will be conducted.

For Rocket Lab, which had never before launched a deep-space mission, CAPSTONE is a significant accomplishment. If everything goes according to plan, Rocket Lab will dispatch other far missions in the near future; the California-based business hopes to launch at least one life-hunting mission to Venus utilising Electron and Photon in the following few years.

Additionally, CAPSTONE is paving the path for private spaceflight in other ways. The mission was created by Colorado-based Advanced Space, which also earned a $20 million NASA contract to run it.

There are also other commercial entities involved. The CAPSTONE cubesat was made by two California businesses, Terran Orbital Corp. of Irvine and Stellar Exploration, Inc. of San Luis Obispo, respectively. Naturally, Rocket Lab also launched the journey to the moon.

CAPSTONE was supposed to launch in May, however many system inspections and other tests caused the launch to be postponed.