Monday, 28 November 2022
You are here: Home NASA postpones the launch of Artemis I on Tuesday while delaying the rollback decision 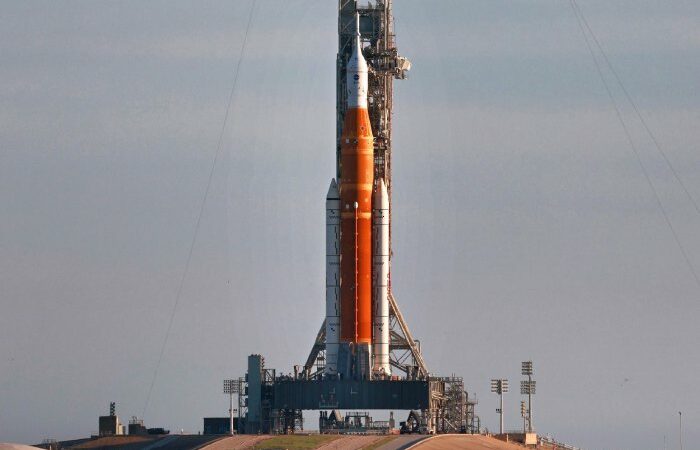 NASA finally decided Saturday to postpone its plan to launch its Artemis I mission to the moon from Kennedy Space Center on Tuesday due to the impending threat of what is expected to be Hurricane Ian.

Managers said on Sunday that they will take more time to decide whether or not to bring back the mammoth 5.75 million-pound, 322-foot-tall Space Launch System rocket, mobile launcher, and Orion spacecraft to the security of the Vehicle Assembly Building.

That decision won’t be made until Monday, according to a Sunday night update on NASA’s website, and a potential rollback won’t begin until Monday or early Tuesday.

“Managers met Sunday evening to review the latest information on the storm from the National Oceanic and Atmospheric Administration, the U.S. Space Force, and the National Hurricane Center and decided to meet again Monday to allow for additional data gathering overnight before making the decision when to roll back. NASA continues to prioritise its people while protecting the Artemis I rocket and spacecraft system,” according to the update.

Initially, NASA had suggested that a rollback might possibly start late Sunday or early Monday.

The storm’s effects are being pushed farther away from the Space Coast with each new forecast. Early estimates suggested that Tuesday morning, when NASA was scheduled to launch, the Space Coast could experience tropical storm-force winds.

What is presently Caribbean Storm The central Caribbean storm Ian is expected to strengthen into a hurricane Sunday night or Monday morning before heading across Cuba and into the Gulf of Mexico. It could make landfall as a Category 2 hurricane with 105 mph winds anywhere from the Panhandle down to Fort Myers as late as Friday, with its centre expected to be more than 100 miles off Florida’s southwest coast on Wednesday.

The big bend south of Tallahassee is where the storm’s centre is expected to hit, according to the consensus track as of 11 a.m. Sunday.

The initial statement Saturday stated: “The agency is taking a step-wise approach to its decision making process to allow the agency to protect its employees by completing a safe roll in time for them to address the needs of their families while also protecting for the option to press ahead with another launch opportunity in the current window if weather predictions improve.”

Missions managers said the rocket was cleared to withstand sustained winds of 85 mph on the launch pad during a briefing on Friday. The hardware would need to be prepared for transport and make the cumbersome 4-mile trip back to the VAB during a rollback, which would take roughly three days. Previously, NASA had stated that staying at the launch pad is preferred since the rolls to and from the VAB can put additional strain on the hardware.

John Blevins, chief engineer with SLS, said, “We’ve got a robust design, but we want to protect the vehicle.”

The next opportunity to launch during this window, if management decide to stay on the launch pad, is on Sunday, October 2, during a 109-minute window that opens at 2:52 p.m. and will fly for roughly a 41-day mission until landing on Nov. 11.

Following then, NASA would have to stop operating until the upcoming windows on October 17–31, November 12–27, and December 9–23. Only a few days in each window have the Earth and moon in the proper alignment for the intended mission.

The Space Launch System rocket, the Orion spacecraft, and the mobile launcher are all used in the unmanned mission known as Artemis I. The SLS’s 8.8 million pounds of thrust during launch would surpass the Saturn V rockets used on the Apollo missions to become the most powerful rocket to ever launch from Earth.

During a trans-lunar injection, the Orion spacecraft will be propelled to a distance of up to 280,000 miles, which is 40,000 miles farther than the moon. Before returning to Earth at a speed faster than any human-rated spacecraft has ever tried, it will make numerous orbits of the moon over a period of several weeks, reaching a maximum speed of 24,500 mph and producing heat of 5,000 degrees Fahrenheit.

To keep people safe on upcoming missions, it is important that Orion be able to withstand harsh conditions. If successful, Artemis II and Artemis III might launch in 2024 and 2025, respectively, to send a crew to orbit the moon and return humans—including the first woman—on the lunar surface for the first time since Apollo 17 in 1972.