Wednesday, 1 February 2023
You are here: Home NASA has chosen two companies to develop spacesuits for its next-gen 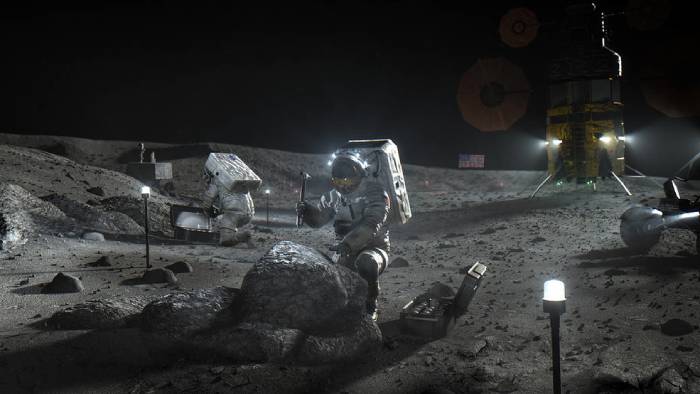 NASA unveiled a plan to purchase new and more versatile spacesuits for its astronauts on Wednesday, taking another step toward landing humans on the Moon.

NASA announced that it would instead purchase spacesuit services from two private companies, Axiom Space and Collins Aerospace, after more than a decade of work to design a new spacesuit in-house.

Each of these companies will be able to exploit NASA-developed technology, but they will be in charge of the overall development of spacesuits for the International Space Station and lunar surface activities. By 2025, Axiom and Collins said they planned to show off their spacesuits for NASA, most likely by a spacewalk outside the space station.

These will be the first new spacesuits NASA has produced in decades. During a press briefing, NASA’s Johnson Space Center director Vanessa Wyche noted, “The previous suit has been the workhorse for 40 years.” “These new capabilities will allow us to continue on the ISS and allows us to do the Artemis Program and continue on to Mars.”

NASA will grant a limited amount of guaranteed financing to support spacesuit programmes at Axiom and Collins as part of NASA’s ongoing embrace of commercial space and ambition of being “one of many” spaceflight customers. However, between now and 2034, the majority of the cash will be distributed through task orders. Following Wednesday’s announcement, both companies will be able to compete for spacesuit services, including continuous maintenance, for Artemis lunar missions and ISS extravehicular activities. The contract has a total ceiling of $3.5 billion for all task orders.

NASA will have some specifications for the spacesuits, but the companies will be in charge of the overall design. This is part of NASA’s goal of allowing private companies to create and design spacesuits that will meet both NASA’s and private customers’ needs. NASA aspires to move faster and provide better value to taxpayers by leveraging the private sector’s efficiency. However, one stipulation is that the design be flexible enough to accommodate astronauts of all sizes. The new outfits must fit everyone from a fifth-percentile lady to a 95th-percentile man.

Axiom Space is already working on its own private space station, and its CEO, Mike Suffredini, stated on Wednesday that the company’s clients are eager to participate in spacewalks. As a result of the contract award, Axiom will be able to hire 300 more people to work on the spacesuit project, which will now have to operate in the dusty environment on the Moon’s surface. KBR, Air-Lock, the David Clark Company, and Paragon Space Development Corporation are among Axiom’s partners.

“It’s fantastic to have a partnership where you can benefit from the years of experience that NASA has, and all the work they’ve done to advance the design to where it is today,” Suffredini said. “And then us as a commercial company can come in and work with them to build it in a way that’s lowest cost so that we can both utilize the suit to meet our needs.”

Collins Aerospace was the other winner, and it will lead a team that includes ILC Dover and Oceaneering. Collins designed the Apollo spacesuits used during the first Moon landings, therefore these three businesses have experience producing spacesuits. Collins does not have its own space station, but it aims to sell its suits to other firms who want to build one in low Earth orbit, according to Dan Burbank, the company’s senior technical fellow.

For this opportunity, the companies beat off a number of other bidders. When NASA first launched the private spacesuit initiative, technically known as the Exploration Extravehicular Activity Services, or xEVAS, contract, more than 40 companies were identified as “interested parties.” Other companies that were interested were Blue Origin, Honeywell Aerospace, Leidos, Sierra Space, and SpaceX.

A long road to new suits

Over the last 14 years, NASA has worked on several distinct programmes to build a new generation of spacesuits, most of which have been overseen by a NASA field centre. NASA has invested $420 million on various spacesuit efforts during that time, but with mixed results. Until early this year, NASA’s aim was to create six “xEMU” suits with contractor and vendor support before awarding a contract to produce more.

According to Lara Kearney, manager of the Extravehicular Activity and Human Surface Mobility Program at Johnson Space Center in Houston, “it became evident that the space agency should share what it has learned from xEMU with the industry and allow them take the development from there.”

“We never intended a government to be a production house,” she explained. “So we knew there was always a transition to industry in our future. The question was when that transition should occur. We decided with the amount of knowledge we had gained from xEMU that we could hand to these guys, and that would get them kick-started. And the sooner we got them on the path to actually delivering flight suits, the higher probability we were actually going to make our schedule.”

The Artemis III mission, according to NASA’s current plan, will land two people on the Moon in 2025. Independent analyses of the Artemis programme, however, suggest that this date is more aspirational than practical, owing to a number of considerations such as the readiness of a lunar lander and spacesuits capable of managing lunar dust.