Wednesday, 30 November 2022
You are here: Home KFC will roll out Beyond Meat’s plant-based fried chicken to menus across the country 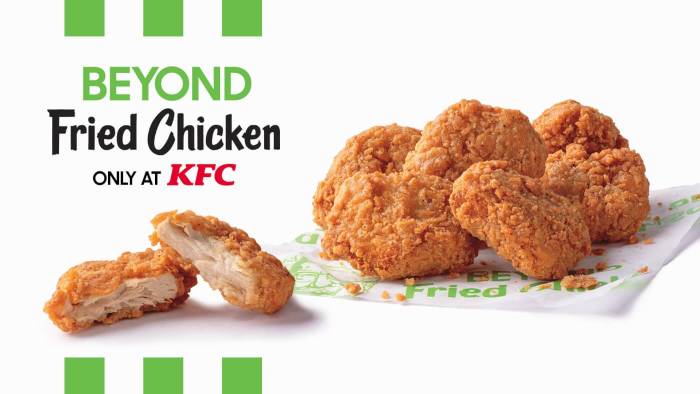 KFC restaurants around the country will begin serving Beyond Meat’s plant-based chicken on Monday for a limited period.

The debut follows years of research and development by Yum Brands and Beyond Meat to develop a meat alternative that tastes and feels like whole muscle chicken, such as chicken breast.

In August 2019, the two companies tested plant-based chicken in an Atlanta restaurant, where it sold out in less than five hours. Two years ago, KFC tested the new dish in Nashville, Charlotte, N.C., and southern California.

Customers at the famed fried chicken company are expected to make better selections in order to keep their New Year’s commitments. Kevin Hochman, president of KFC in the United States, said, “This is really about where the customer is going; they want to eat more plant-based proteins.” “It’s January, so it’s a time of New Year’s resolutions and wanting to do something different in your diet.”

For health and environmental concerns, more Americans are adopting a so-called flexitarian diet, in which people reduce their meat consumption. This has fueled the rise in popularity of plant-based substitutes.

Beyond Meat CEO Ethan Brown said, “From a supply perspective, we feel really good about it, and it’s something we have experience with in initial trials.”

Hochman and Brown are so confident in the product that the current nationwide spike in the Covid omicron variation hasn’t discouraged them.

The partnership comes at a time when many restaurants are short-staffed due to a countrywide labour shortage. Some chains have been hesitant to add new items or have even trimmed back their menus in order to run smoothly even with fewer personnel. Increases in new Covid-19 cases exacerbate such problems, when workers call in sick as a result of positive testing or virus exposure.

Beyond Meat and Yum established an official partnership about a year ago to provide unique plant-based alternatives for Pizza Hut, Taco Bell, and KFC. Chipotle Mexican Grill began serving plant-based chorizo in its restaurants nationwide on Monday. In 2022, it will also target clients who are attempting to eat less meat.

Getting ready for the launch

In December, Beyond Meat hired industry veterans from Tyson Foods for its C-suite, including Doug Ramsey as chief operating officer and Bernie Adcock as chief supply chain officer, in preparation for upcoming releases in the new year.

“We’re continuing to grow the operations team; they did a lot of work to help the team get ready in these final days,” Brown said, noting that the Yum partnership had been in the works for years. “They’ve helped us prepare for this and we brought in, I think, some of the top executives in the industry.”

Beyond Meat is attempting to resurrect its stock. Shares have lost half their worth in the last year, bringing the company’s market value down to $3.9 billion. According to Factset, short sellers bet against the stock represent 37.2 percent of available shares, with the price closing down 5% at $61.62.

Yum, on the other hand, has seen its stock rise 30% in the last year, increasing its market value to $40.3 billion. The price of KFC’s fried chicken has risen due to high demand. During the third quarter, same-store sales in the United States increased by 13% year over year.

Synergies with the retail sector

However, the partnership opens up the possibility of “Beyond” restaurant sales. The corporation is attempting to attract more customers to its grocery store products, which initially sold well during the epidemic but then saw sales fall in succeeding quarters.

Brown stated, “It has great synergies with what we are trying to do in retail.”

In the newest partnership between fast food businesses and influencers, YouTube personality Liza Koshy will star in the plant-based chicken’s marketing campaign to promote the new menu item. However, because the Beyond Fried Chicken is prepared using the same machinery as KFC’s standard fried chicken, KFC will not actively market to vegans and vegetarians.

KFC’s Beyond Fried Chicken is available in six- or 12-piece quantities, with dipping sauce included. Prices start at $6.99 before taxes.