Wednesday, 1 February 2023
You are here: Home How to turn on or off the new Google News on the web 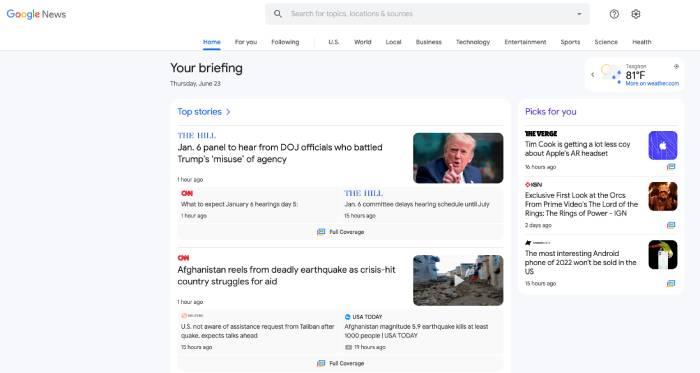 One of the largest news aggregation services available, Google News has been giving users a 360-degree view of the news since 2002. Google decided it was time to update the service once more twenty years after its initial release as a web beta and various redesigns along the road. There is a brand-new Google News website that complements the iOS and Android mobile apps much more.

According to Google’s blog post, the redesign of Google News is meant to be user-driven and prioritises new sections. The more customized “Headlines” of the previous design are completely absent from the new website, which instead puts your personalised top headlines, local news, and picks front and centre. You can access fewer alternative stories at a look thanks to the new design, which places a lot more emphasis on individual stories than the previous one did. The Full Coverage shortcut still gives you access to more articles on a specific story. This results in a less cluttered design, but the news is still presented to you in a less distinct way.

A more encouraging aspect of the makeover is that it provides a much more condensed look that requires less scrolling. A fresh trick is also up the local news section’s sleeve in the top right corner. You can add various locations where you want to read about local news, and there is an easy way to navigate between them. For those who are logged in using their Google account, there are additional more robust customization options. You can customise the “Your topics” section below to include the topics you want to see in the order you want to see them.

The way fact checks are shown has been updated, showing that you immediately verified statements and conclusions. It’s just unfortunate that the portion has been pushed down and is now little less noticeable. The new Google News for the web is obviously based on the Android and iOS applications, which have long offered comparable layouts and capabilities.

Additionally, after an eight-year absence, Google News is finally coming back to Spain. Due to disagreements with publishers about text snippets, the company departed the market. According to the article, the country just established a new copyright law that “allowing Spanish media outlets – big and small – to make their own decisions about how their content can be discovered and how they want to monetise that content.” According to research cited by Google, after it was forced to leave Spain in 2014, news consumption dropped, with up to 10% less visitors to websites.

According to Google, its News service is accessible in more than 125 nations and 40 different languages. Over 24 billion unique articles from News and Search are read by users each month. Google employs machine learning algorithms to sift through the sea of tales to present its users with the material that is most pertinent to their interests, language, and region.

The new Google News interface is as easy to use as it possibly can be. Simply navigate to news.google.com as normal and check for the blue banner introducing the new Google News at the top. Click the Try it out link to access the new look.

It’s also feasible to go back to the previous design, at least temporarily, if you don’t like what you see. To do this, locate and click the settings cog in the new design’s upper right corner. Next, click Settings in the pop-up menu that appears. Start utilising the new Google News is a checkbox that is located at the very bottom. To switch back to the original look, uncheck it.

There are several ways to make the most of Google News, regardless of which style you choose.