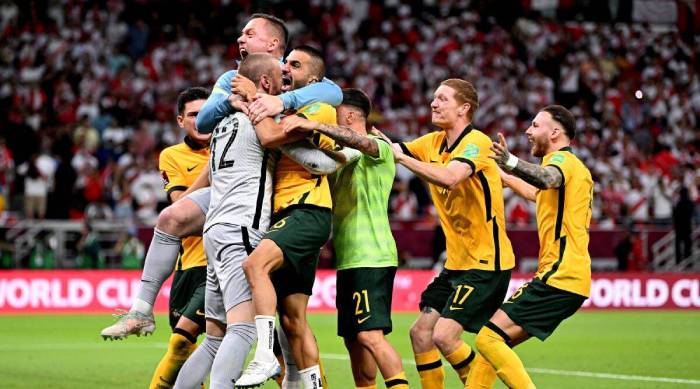 Following a 0-0 draw after extra time in an inter-continental playoff on Monday, Australia’s dancing replacement goalkeeper Andrew Redmayne saved the final penalty to clinch a spot in this year’s World Cup in Qatar.

At the Ahmad bin Ali Stadium, Redmayne danced across the goal line before diving to the right to block a kick from Alex Valera and give Australia a deserved victory.

Redmayne was brought in three minutes before the end of the game for the shootout, and his antics on the field made him an instant hero as he tried to distract the opposing kicker.

In a throwback to Liverpool’s Bruce Grobbelaar’s clowning antics when his club won the European Cup in 1984, he danced up and down, wriggling his hips and swinging his arms around.

It was enough for Luis Advincila’s effort to hit the post, and then for Valera’s effort to be saved, as Australia qualified for their fifth World Cup in a row and their sixth overall.

At the World Cup, Australia will be in Group D with holders France, Denmark, and Tunisia. The finals will take place between November 21 and December 18.

Australia had missed the first penalty but converted the following five to silence the thousands of Peruvian fans who had gone to the game and cheered loudly but saw their team create few chances.

Instead, a stoic Australia dominated the initial stages, with winger Martin Boyle cutting through the Peruvian defence twice to offer teasing crosses.

The second half followed the same trend as the first, with little chances on goal until the 80th minute, when Australia had three good chances to win the game.

Ajdin Hrustic’s poor free kick was easily saved by Peru captain Pedro Gallese, and five minutes later, Aziz Behich raced past two tackles and found himself in front of goal, but his attempt to curl his shot into the net was narrowly missed.

Then, after a move down the left flank by Australia substitute Awer Mabil, he passed the ball into the path of Hrustic, but his shot lacked force, and Gallese stopped it once more.

After nine minutes of extra time, Australia’s Mathew Ryan was finally put to the test by Edison Flores’ stinging shot, which the goalkeeper saved.

Flores then hit the post as the South Americans found an extra gear in the dying minutes, but after two hours of play, they were still unable to settle the result, laying the platform for Redmayne to emerge as a hero.

The 31st place at this year’s World Cup was determined by a single-game playoff between the fifth-place finishers in Asian and South American qualifying.

On Tuesday, the final spot in the finals will be decided in an inter-continental playoff between Costa Rica and New Zealand, which will also take place at the Ahmad bin Ali Stadium.