Wednesday, 8 December 2021
You are here: Home American Music Awards 2021: BTS make history as they win artist of the year 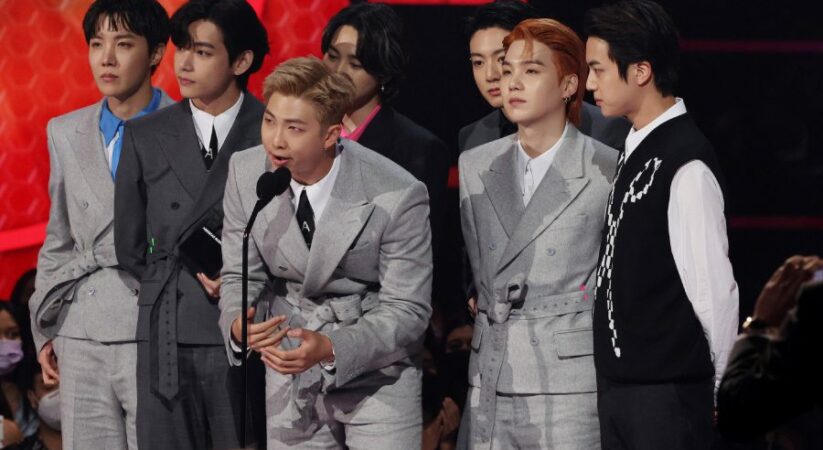 At the 2021 American Music Awards, BTS was named Artist of the Year, the night’s highest prize!

On November 21, the 2021 American Music Awards will be held at the Microsoft Theater in Los Angeles. BTS was present at the presentation and won all three prizes for which they were nominated: Favorite Pop Duo or Group, Favorite Pop Song for “Butter,” and Artist of the Year. BTS competed against Ariana Grande, Drake, Olivia Rodrigo, Taylor Swift, and The Weeknd for Artist of the Year.

BTS has became the first Asian act to win Artist of the Year at the American Music Awards, and they have also won Favorite Pop Duo or Group for the third year in a row.

BTS took the stage to accept their award after being announced as the winners of Favorite Pop Duo or Group. “Thank you ARMY, and thank you AMAs so much for this. For three years in a row, wow!” Jin took the mic and thanked their fans, saying, “This is all possible thanks to ARMY. You’re our universe.” RM wrapped up the speech by sharing, “It took four years to be on this stage to get this trophy. Thank you so much. Actually it means to us even more because we’re actually a small boy band from Korea. We just got united by the love for our music, and all we want to do is just spread love, the good vibes and energy through music and performance. But without you guys, ARMY, we couldn’t have done anything. Thank you so much”.

BTS took the stage to accept their award after being announced as the winners of Favorite Pop Duo or Group. “Thank you ARMY, thank you AMAs, and thank you everyone for loving our song ‘Butter.’” Jungkook added, “‘Butter’ is a special song to us. We hope it makes you feel smooth like butter.” RM concluded the speech once again. “Thanks to you all, ‘Butter’ has received so much love this year. All we had to do is just put out positive energy despite these hard times. This award truly proves that this song reaches many people’s hearts. Never take for granted. Thank you so much. But we couldn’t have done it without you, ARMY.

Finally, RM admitted that he forgot what he was supposed to say for the Artist of the Year award, but he went on to add, “Thank you AMAs, we’re truly honoured to be on this stage with such amazing, tremendous artists right over here. We’re so honored. Thanks for that .” “I’m nervous, yeah,” he said after a little pause.

The rest of his speech was delivered by him. “Four years ago, we gave this first-time-ever TV live performance at this stage, AMAs, it was ‘DNA,’ and we were too excited and nervous at the time. And it’s been a long and amazing ride since then, but nobody could have ever bet on the odds of us standing here receiving this award. Except you all, ARMY. Except you all. Seven boys from Korea, united by a love for music. We met the love and support from all the ARMYs all over the world. This whole thing is a miracle. Seriously, we’ll never take this for granted. Thank you so much. We love you all, we want to give this honor to you guys. Thank you HYBE, thank you staff, all the people.”

Suga delivered his speech in Korean, saying, “We made our U.S. TV debut four years ago at the AMAs, and I had no idea we would be able to receive the Artist of the Year. I think it’s all thanks to ARMY, thank you ARMY!”

Jungkook shared, “We just wanted to make people happy with our music. We believe that this award opens the beginning of our new chapter. In the past few years, we learned that each and every moment is precious. So in 2022, we want to focus on…” and stopped. V took the microphone and said, “I’m deeply touched by this award. I appreciate your love. Thank you ARMY, thank you AMAs. Thank you, we purple you!”

BTS performed “My Universe,” a collaboration with Coldplay, as well as “Butter,” at the ceremony.

BTS, congrats on your amazing achievement!