Monday, 28 November 2022
You are here: Home According to Musk, PepsiCo will receive Tesla semi-electric vehicles on December 1 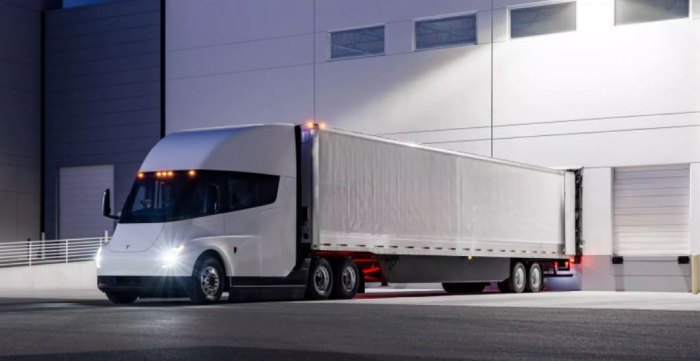 Elon Musk, the CEO of the electric vehicle manufacturer, tweeted on Thursday that Tesla is starting to produce semi-electric commercial trucks, and PepsiCo will receive the first delivery on December 1.

Musk predicted that the Class 8 truck would enter production by 2019 when he unveiled the prototype of his futuristic, battery-powered Semi in 2017.

Due to a lack of parts, the deadline has been delayed several times, and Musk said that the production would be put off until 2019. He announced the truck’s intended manufacture in August.

Musk confirmed in a subsequent tweet that the car has a 500-mile range (805 km). How many Semi trucks the electric car manufacturer intends to create was not immediately known.

The vehicle is anticipated to cost $180,000, but under a United States subsidy programme that was passed by the Senate, it would be eligible for a tax break of up to $40,000.

To save fuel costs and fleet pollution, PepsiCo reserved 100 of Tesla’s semi-electric trucks back in 2017.

Ramon Laguarta, the executive chairman of PepsiCo, stated that 10% of the company’s gas emissions were related to transportation in an interview with CNBC last year.

The manufacturer of Mountain Dew soda and Doritos chips previously declared its intention to employ the vehicles to transport snacks and drinks to stores in addition to between manufacturing and distribution facilities.

A Reuters inquiry for comment received no immediate response from PepsiCo.