Monday, 8 August 2022
You are here: Home You could finally receives high-five in emoji soon 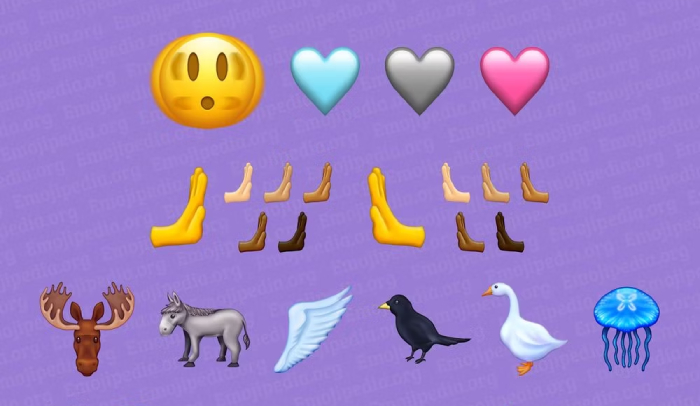 This is not the beginning of a bad joke; rather, these are some of the emojis that might soon be available on a smartphone near you. They include a moose, a donkey, and a pair of maracas.

Emoji 15.0, a collection of 31 emojis that are up for consideration for inclusion in the enormous collection, is being previewed by Emojipedia. This particular collection is more of a filling-in-the-gaps effort rather than having a consistent theme. While some, like the pink heart, were popular request, others seem to have a more important purpose. For instance, to represent a high-five, you can substitute the new Pushing Hand emoji for Folded Hands.

A goose, crow, and jellyfish are being added to the emoji zoo, while the digital menu is also getting a ginger root and pea pod. The Khanda, a religious symbol for the Sikh faith, a wing, a Wi-Fi signal, and a flute are all included in the miscellaneous category.

The Unicode Consortium will evaluate the emoji based on this preview before making it public. Even though it may seem absurd for a council of elders to choose emojis, their bylaws explain why they are necessary. In essence, the organisation creates a global standard for emojis that will be compatible with all of the major internet apps and operating systems.

This September, the final list of Emoji 15.0 will be made public, allowing everyone to see who made the cut and who didn’t. The new emojis are expected to be used by Google and Android platforms first starting in October 2022, according to Emojipedia’s estimated timeline. Apple, Samsung, Twitter, and Facebook are also anticipated to follow suit beginning in January 2023. According to Emojipedia, these dates are approximations from the previous year, so they could change. Some platforms might adopt much more slowly or quickly than others.

As part of World Emoji Day on July 17, Emojipedia is urging users to take part in a survey while you wait for the final decision. The first thing the creators want to know is which of the new emoji you are most looking forward to using (we chose the shaking face). Additionally, a double-elimination competition for the emoji that best embodies 2022 is being held on Twitter.

Emojipedia included some interesting emoji facts and statistics in the announcement as well.

In 2022, emoji usage reached a record high. Before reaching their high in June 2022, 22 percent of Tweets had at least one emoji, according to Emojipedia’s statistics. They also showed that until Loudly Crying Face overtook Face with Tears of Joy in March 2021, Face with Tears of Joy had been the most popular emoji since 2011. The two have since competed against one another for world dominance. As of this writing, the Loudly Crying Face emoji rules supreme.

If you’re still wanting emoji news, they suggest reading up on the most recent reports about Slack users getting into trouble for using improper emojis.