Thursday, 30 June 2022
You are here: Home WTA declares tournaments in China will be suspended immediately because of concerns for Peng Shuai 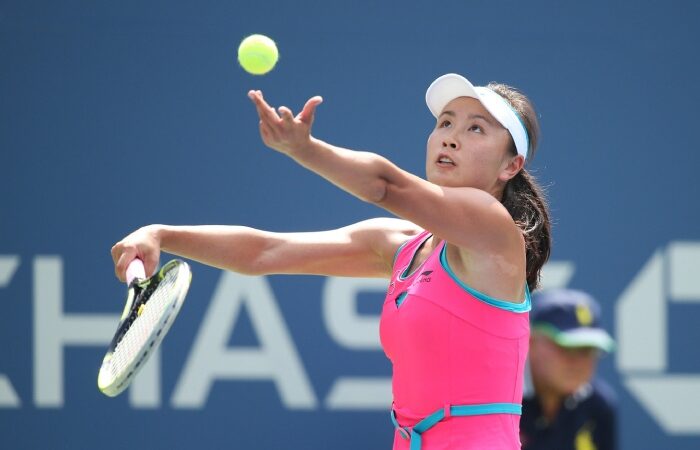 In response to Beijing’s silence on sexual assault charges made by Chinese tennis player Peng Shuai against a former top Communist Party official, the Women’s Tennis Association (WTA) has announced an immediate suspension of all competitions in China, including Hong Kong.

WTA chairman and CEO Steve Simon said in a statement released Wednesday that the decision was based on Chinese officials’ “unacceptable” approach to the #MeToo scandal, which included rushing to conceal Peng’s charges and dismissing pleas for a fair and transparent investigation.

“In good conscience, I don’t see how I can ask our athletes to compete there when Peng Shuai is not allowed to communicate freely and has seemingly been pressured to contradict her allegation of sexual assault,” Simon said.

“Given the current state of affairs, I am also greatly concerned about the risks that all of our players and staff could face if we were to hold events in China in 2022.”

In a since-deleted social media post dated November 2, Peng, one of China’s most well-known sportsmen, accused former Vice Premier Zhang Gaoli of forcing her into sex at his home three years ago.

Peng was instantly silenced by blanket censorship and went missing for more than two weeks, forcing the women’s tennis world to demand explanations as to her whereabouts, as well as a comprehensive inquiry into her charges against Zhang.

Individuals working for Chinese government-controlled media and the official sports system released a number of “proof of life” images and videos of Peng amid mounting international outrage.

“Unfortunately, the leadership in China has not addressed this very serious issue in any credible way. While we now know where Peng is, I have serious doubts that she is free, safe, and not subject to censorship, coercion, and intimidation” Simon remarked.

“None of this is acceptable nor can it become acceptable. If powerful people can suppress the voices of women and sweep allegations of sexual assault under the rug, then the basis on which the WTA was founded — equality for women — would suffer an immense setback. I will not and cannot let that happen to the WTA and its players .”

The WTA’s announcement follows Simon’s threat to CNN on November 18 that if Peng was not fully accounted for and her charges were not properly investigated, he would be willing to lose hundreds of millions of dollars in business in China.

“I can only imagine the range of emotions, and feelings, that are likely going through Peng right now. We hope that she feels that none of this is her fault, we are very proud of her” Following the latest WTA announcement, Simon remarked in an interview with CNN on Wednesday.

“But this is something we can’t walk away from. If we walk away from this, we’re basically telling the world, that not addressing sexual assault with the respect and seriousness it requires is OK,” he said. “It’s something that we simply cannot allow to happen, and it’s not where we stand for as an organization.”

Some of the biggest names in women’s tennis praised the WTA’s decision to drop out of China on Wednesday, many of whom had previously expressed concern about Peng’s safety and whereabouts on Twitter, using the hashtag #WhereIsPengShuai.

Tennis Hall of Fame International “for taking a strong stand on defending human rights in China and around the world,” Billie Jean King complimented the WTA move.

“The WTA has chosen to be on the right side of history in defending the rights of our players,” Jean said in a statement, adding: “This is yet another reason why women’s tennis is the leader in women’s sports.”

Martina Navratilova, an 18-time Grand Slam winner, also chimed in on the International Olympic Committee’s (IOC) seeming silence ahead of the Beijing Winter Olympics next year.

“This is a brave stance by Steve Simon and the WTA where we put principle above $ and stand up for women everywhere and particularly for Peng Shuai. Now – what say you, @IOC ?!? #IOC – so far I can barely hear you!!!” said Navratilova in a statement posted online.

The International Olympic Committee (IOC) announced on November 21 that its president, Thomas Bach, had a 30-minute video conversation with three-time Olympian Peng, as well as a Chinese sports official and another IOC representative.

Peng appeared to be “doing fine” and “relaxed” during the call, according to the statement, and stated she “would like to have her privacy respected.” The IOC has not explained how the video chat with Peng was organised, and the video has not been made public.

Dick Pound, a long-time IOC member, said those on the call with Peng came to the “unanimous conclusion” that she is fine, adding that the international response to the call has “puzzled” him.

China’s Ministry of Foreign Affairs said late last month that the government hoped “malicious speculation” about Peng’s location and well-being would cease, and that her issue should not be politicised.

The WTA’s decision to leave China has elicited no response from Chinese officials. WTA’s official account on Weibo, China’s tightly regulated version of Twitter, does not include a statement.

The WTA’s account, which has over 400,000 followers, is still active on Weibo, but it is no longer visible in search results, but certain postings are still viewable.

In the early hours of Thursday, some Weibo users expressed support for the WTA’s decision in comments under the association’s earlier posts, but these were quickly blocked.

Hu Xijin, editor-in-chief of the state-run nationalist daily Global Times, accused the WTA of using Peng to bash China on Twitter, which is restricted in mainland China.

“WTA is coercing Peng Shuai to support the West’s attack on Chinese system. They are depriving Peng Shuai’s freedom of expression, demanding that her description of her current situation must meet their expectation,” Hu tweeted.

Tennis has become more popular in China over the last few decades, with several Chinese players climbing into the top 100 worldwide. The women’s game, in particular, has a sizable market, thanks in part to the success of Chinese tennis star Li Na, who won the French Open in 2011 to become Asia’s first grand slam singles champion, followed by a second major victory at the 2014 Australian Open.

The WTA has made a significant effort into China in recent years. The WTA Finals moved from Singapore to Shenzhen, China’s southernmost city, in 2019, after a ten-year agreement.

Simon praised the agreement with Shenzhen authorities, which purportedly includes the construction of a new multimillion-dollar tennis stadium, as a “huge opportunity” for women’s tennis in China in a 2018 interview with the New York Times.

Because of the coronavirus outbreak, there have been no WTA events in China for the previous two years.