Saturday, 25 June 2022
You are here: Home World No Tobacco Day 2022: Here’s everything you need to know about this day 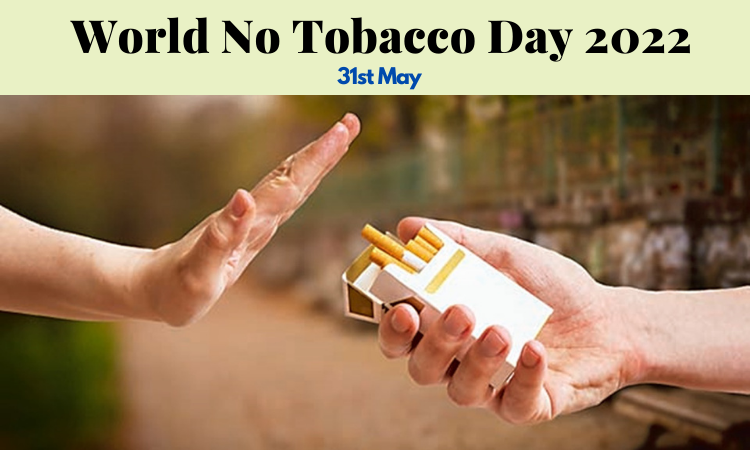 The World Health Organization (WHO) supports the campaign to raise awareness about the health dangers connected with tobacco use and to encourage governments to develop measures to assist individuals in quitting smoking and using other tobacco products.

Nicotine, for example, is extremely addictive by nature and can cause a dependency that leads to smoke cravings in high-stress situations. According to the World Health Organization, more than 8 million people die each year as a result of tobacco use. Smoking any tobacco product reduces lung capacity and raises the risk of dangerous heart-related diseases that can lead to cancer.

‘Tobacco: Threat to our planet’ is the theme for No Tobacco Day 2022. The issue highlights the environmental impact of tobacco, including its cultivation, manufacture, distribution, and waste after consumption. The campaign will reveal the tobacco industry’s attempt to ‘greenwash’ its image and goods by presenting itself as environmentally aware.

History of No Tobacco Day:

Significance of No Tobacco Day:

WHO’s No Tobacco Day campaign aims to raise global awareness about the tobacco epidemic and the preventable deaths and diseases it causes. This year, the World Health Organization (WHO) will focus on the negative effects of tobacco on the environment. Several initiatives, events, and activities will be held to raise awareness about the negative impacts of tobacco on the environment.

According to the WHO, 70% of tobacco users around the world do not have access to the tools they need to quit smoking. The World Health Organization (WHO) is optimistic that some tried-and-true strategies and a strong support structure would be able to assist smokers in effectively quitting.

The following are some of the benefits of stopping smoking:

On this day, a variety of campaigns, events, and activities are held to raise awareness about the harmful effects of tobacco on one’s health. Quitting smoking has both immediate and long-term health benefits.

The following are some of the positive health changes that occur, according to WHO: