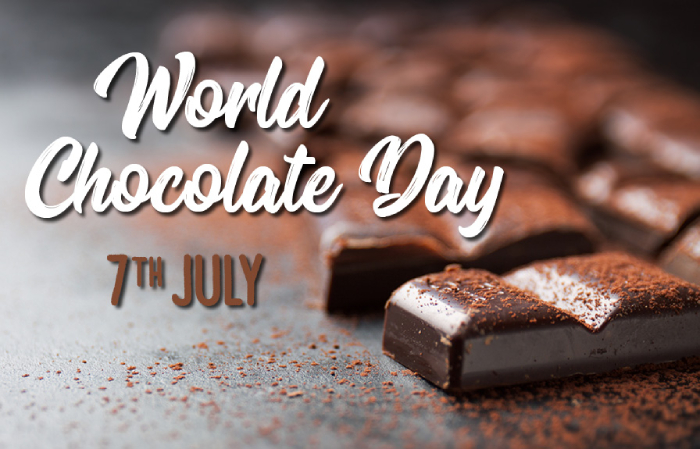 Every year on July 7th, the International World Chocolate Day is observed by individuals all over the world who like the sweetness of the delicacy. The event is celebrated on this day to honour how native Europeans first tasted chocolate. Millions of people enjoy the treat on this day and give gifts of it to family, friends, and loved ones.

The Mayans and the Aztecs are thought to have regarded chocolate as a divine food 2,500 years ago, and they are known to have enjoyed it with chilli peppers in its thick and frothy form. On World Chocolate Day, various kinds of chocolate are consumed both nationally and internationally. The day provides a chance to experience the delicacy that was initially discovered in Europe around this period.

Chocolate, the world’s greatest food, was first created from a seed of a tropical Theobroma cacao tree. People all around the world began to indulge in it as one of the most expensive desserts in the world. According to Smithsonian magazine, Joseph Fry devised a moldable chocolate paste by mixing melted cacao butter back into Dutch cocoa. This resulted in the first modern chocolate bar, which was discovered in early 1847. A short time later, the first milk chocolate in the world was introduced on the market by Nestle, a brand that is now well-known all over the world. Chocolate has travelled far since its origins in Latin America, evolving into a variety of flavours, shapes, and types.

World Chocolate Day is a time to enjoy the delicious treat, which has a number of benefits. After being observed for the first time in 1981, this day is now annually recognised. It has been discovered that eating chocolate with a “high cacao” percentage rather than sugar has a number of health benefits. According to the survey, more than three out of every four respondents eat chocolate on a weekly basis. Antioxidants included in dark chocolate are believed to lower blood pressure and enhance cardiovascular health. A substance renowned for a “happy mood,” endorphins, are also released into the body by chocolate.

The following are a few of chocolate’s health benefits:

Having chocolate reduces stress. It aids the body in lowering cortisol levels, which are a sign of stress. Additionally, the endorphins that chocolate releases into the body have the power to make people joyful.

Consuming dark chocolate is thought to reduce the risk of heart disease. The majority of dark chocolates are rich in flavonoids, which support heart health. Additionally, it shields adults from the problem of high blood pressure.

Despite the fact that people mistakenly believe eating chocolate will result in more calories and weight gain, the contrary is actually true. By reducing appetite and hunger sensations, for example, dark chocolate may promote weight loss through a number of processes.

Many people are unaware of this, but eating small amounts of dark chocolate will help your skin seem young and fresh.

Chocolates are high in antioxidants:

Antioxidants are said to be abundant in dark chocolate and are good for the body.

To gain from dark chocolate’s health benefits, you should preferably only eat that type of chocolate. But keep in mind the moderation principle. Avoid eating too much chocolate.