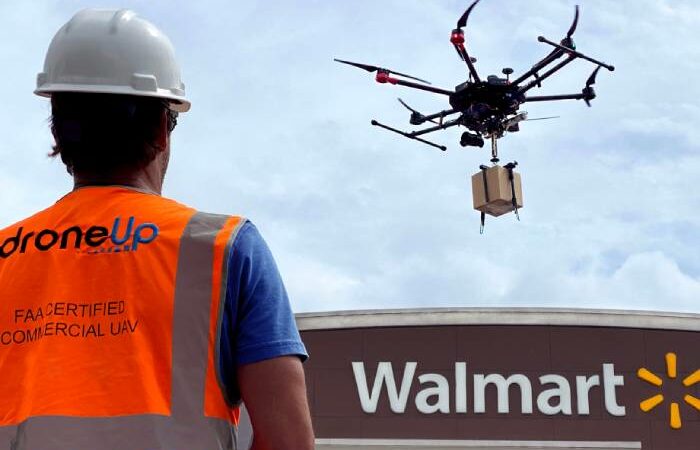 This year, Walmart is expanding drone delivery to six states, allowing many more customers to receive a box of diapers or supper fixings in 30 minutes or less.

The big-box retailer said it will be able to serve 4 million households in Arizona, Arkansas, Florida, Texas, Utah, and Virginia thanks to an expansion with operator DroneUp. Air deliveries will be made from a total of 37 locations, 34 of which will be handled by DroneUp.

It disclosed its expansion intentions in a blog post on Tuesday. Walmart now offers drone delivery from a few stores in northwest Arkansas and North Carolina near its headquarters.

Walmart has been testing with how small unmanned planes could disrupt the retail game, drive e-commerce growth, and transform its stores into a method to outrun Amazon in terms of speed. It initiated trial operations to deliver groceries, household goods, and at-home Covid-19 test kits to customers two years ago with three operators — Flytrex, Zipline, and DroneUp. The specifics of the acquisitions were not disclosed by the corporation.

The new distribution method is part of Walmart’s attempt to use its massive physical base as a competitive advantage. Nearly 90 percent of Americans reside within 10 miles of one of Walmart’s 4,700 locations. Walmart has a growing range of rapid online options through those shops, including curbside pickup, InHome, which delivers straight to customers’ refrigerators, and Express Delivery, which delivers things in two hours or less.

Customers who live within the delivery range of a Walmart drone can order thousands of things between the hours of 8 a.m. and 8 p.m. A $3.99 fee is charged for each drone delivery. Customers can place orders for up to ten pounds of food.

Each order is chosen, packaged, and loaded at the store before being flown to the customer’s yard or driveway by a professional pilot. The package is carefully lowered by a cord on the drone.

DroneUp’s website or the websites of the two other operators must be used to place orders. Walmart said it plans to add order-placing functionality to its own website and app in the future.

According to David Guggina, senior vice president of innovation and automation for Walmart U.S., with the wider network of sites, Walmart will be able to deliver over 1 million parcels by drone per year.

Customers’ orders have been one of the surprises of the drone tests, he noted. Guggina predicted that customers will utilise the drones to collect emergency products like over-the-counter medication. Instead, he claims, many people have used it for the sake of convenience. Hamburger Helper, for example, is the top seller for drone delivery at one store.

Batteries, garbage bags, laundry detergent, and Welch’s fruit snacks are among the other products frequently delivered by drone, according to the business.

Walmart will also generate money from drones in another way. It hopes to recoup delivery costs by selling drone-taken pictures to municipalities and local businesses, such as construction and real estate firms. The profits will be shared with the drone pilot.