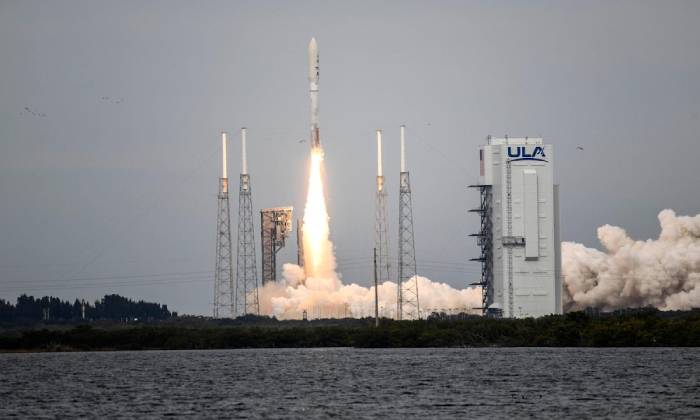 On Jan. 21, a United Launch Alliance Atlas 5 rocket launched two space-monitoring satellites for the US Space Force in its first mission of 2022.

The rocket took out from Space Launch Complex-41 at the Cape Canaveral Space Force Station in Florida at 2:00 p.m. Eastern.

The USSF-8 mission was launched into an orbit about 22,000 miles above the equator.

GSSAP-5 and GSSAP-6 are satellites in the Geosynchronous Space Situational Awareness Program (GSSAP). Northrop Grumman built the fifth and sixth satellites for the GSSAP programme.

The Atlas 5 rocket was launched for the 91st time with USSF-8. According to ULA, this was the Atlas 5’s first and only intended launch with a single solid rocket booster and a 5-meter diameter fairing in the 511 configuration. On a webcast, ULA CEO Tory Bruno said the asymmetric “big slider” design was chosen to generate “just the right amount of energy” for this mission.

The GEM-63 solid rocket booster was jettisoned around two minutes into the flight. About three and a half minutes after launch, the payload fairing detached from the rocket. The Atlas first stage’s RD-180 engine shut down a minute later, and the Centaur upper stage carrying the USSF-8 payload separated. The Centaur upper stage’s first engine blast was confirmed 13 minutes into the flight, the first of three engine burns to inject the satellites directly into geosynchronous orbit over a more than seven-hour trip. Six hours and 35 minutes after launch, GSSAP-5 separated, followed by GSSAP-6 around ten minutes later. The mission was declared a success by the Space Force on Friday evening.

Because the GSSAP satellites are used to monitor objects in the geostationary belt, Chief of Space Operations Gen. John “Jay” Raymond labelled USSF-8 a “really important mission.” “The way I would describe it is as a neighborhood watch capability that allows us to better understand what’s going on in the domain especially in a really critical orbit like the GEO orbit,” said Raymond.

The first two pairs of GSSAP satellites were launched on ULA Delta 4 medium rockets in 2014 and 2016. ”These next two satellites will add to that capability and enable us to understand more completely things that occur in the geosynchronous orbit. It’s a key piece in the puzzle for space domain awareness,” said Lt. Gen. Stephen Whiting, commander of the Space Force’s Space Operations Command.