Saturday, 25 June 2022
You are here: Home Tom Brady, 7-Time Super Bowl Champion, is retiring after 22 seasons in the NFL 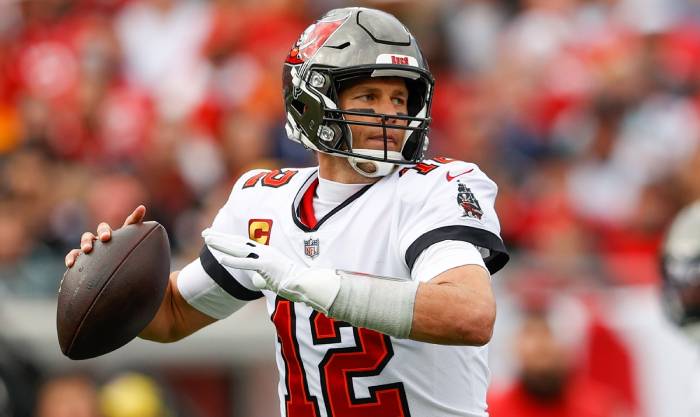 Tom Brady, the quarterback of the Tampa Bay Buccaneers, announced his retirement from football on Tuesday, saying it’s time to focus on other things after a 22-year NFL career.

Brady writes on the harsh physical toll and total commitment required to play professional football. He only made a few cryptic statements concerning his future plans.

Brady, the NFL’s all-time leader in passing yards and touchdown throws, stated, “This is difficult for me to write, but here it goes: I am not going to make that competitive commitment anymore.”

“I have loved my NFL career, and now it is time to focus my time and energy on other things that require my attention,” he said.

Brady just completed his second season with the Buccaneers, as the defending Super Bowl champions were defeated in the NFC semifinals by the Los Angeles Rams.

Brady rescued the Bucs from a 27-3 hole to tie the game late in the fourth quarter before Matt Gay’s game-winning field goal at the buzzer a week ago Sunday.

As soon as the game finished, questions about Brady’s future arose, including if he would return to Tampa Bay for the 2022 season.

Even as recently as Monday, it remained unclear whether Brady would retire.

On the Sirius XM programme Let’s Go!, he remarked, “I think when the time is right, I’ll be ready to make a decision one way or the other.”

“I’ve done a lot of reflecting in the past week and have asked myself difficult questions,” he wrote. “And I am so proud of what we have achieved.”

The will-he-won’t-he drama has become a joke in the sporting world.

The Jets, who have lost 30 of 37 games versus Brady-led teams, remarked, “But seriously, congrats on a first-ballot, Hall of Fame career.” “We may not miss seeing you on the field, but the entire football world will.”

Brady thanked practically everyone in his inner circle, including his family, teammates, and coaches, in great detail.

Brady has spoken freely about his wife’s desire for him to retire from football, as well as the emotional suffering she experienced as a result of each hit he sustained.

“Her selflessness allowed me to reach new heights professionally, and I am beyond words what you mean to me and our family,” he wrote on Tuesday.

Despite spending two seasons in Tampa and two decades in Foxborough, Massachusetts, Brady made no mention of the New England Patriots or coach Bill Belichick in his lengthy statement released on Tuesday.

Patriots Chairman and CEO Robert Kraft praised Brady for transforming a mediocre organisation into one of the game’s great dynasties.

“Words cannot describe the feelings I have for Tom Brady, nor adequately express the gratitude my family, the New England Patriots and our fans have for Tom for all he did during his career,” Kraft said in a statement Tuesday.

“In a team sport like football, it is rare to see an individual have such a dominant impact on a team’s success,” he said.

Brady shocked the football world when he departed New England for Tampa Bay in the spring of 2020.

“My playing career has been such a thrilling ride, and far beyond my imagination, and full of ups and downs,” wrote Brady, a sixth-round draught pick out of the University of Michigan.

“When you’re in it every day, you really don’t think about any kind of ending. As I sit here now, however, I think of all the great players and coaches I was privileged to play with and against — the competition was fierce and deep.”

The Buccaneers had only won one Super Bowl in 44 seasons before Brady arrived in Tampa. The team is primarily known for a 26-game losing record that began shortly after it was established as an expansion team.

In just two seasons with the Bucs, Brady has brought them one Lombardi Trophy.

In a statement, the Glazer family said, “Tom arrived in Tampa Bay with an unprecedented level of expectations and delivered some of the most memorable moments in our franchise history.”

“His impact on our team and community was immediate and profound. Tom’s remarkable NFL journey has come to an end, but we will continue to celebrate his legendary career as the greatest quarterback of all time and are appreciative and grateful for the time he spent as a Buccaneer ” According to the Glazers.

Brady is widely regarded as the greatest quarterback in NFL history, having accumulated more passing yards (84,520) and touchdown passes (624) than any other quarterback in the league’s history.

He had one of his best seasons last year, passing for 5,316 yards and 43 touchdowns, both league highs.

Brady’s excellent level of play prompted him to openly discuss the possibility of playing until he was 50, which was both a fantastic and attainable goal.

The next two oldest players in the NFL this season were 39 and 40 years old. Ben Roethlisberger, the recently departed quarterback of the Pittsburgh Steelers, was among the group, as were two offensive linemen and two punters.

The Los Angeles Rams and the Cincinnati Bengals, both coached by head coaches much younger than Brady — Sean McVay, 36, and Zac Taylor, 38 — will compete in the Super Bowl on Feb. 13 on NBC.

Brady’s longevity has long been a source of fascination, and he has tried to cash in on it by writing books about health, food, and exercise.

He follows a simple routine that includes plenty of sleep, no late-night food, and early morning workouts. He has, however, taken an unusual stance against nightshade crops like potatoes, peppers, eggplant, and tomatoes.

Brady has a long history of being a vocal critic of the food business, having famously chastised Coca-Cola and Frosted Flakes in 2015.