Saturday, 2 July 2022
You are here: Home This app allows you to use the browser to run Android Auto on a Tesla 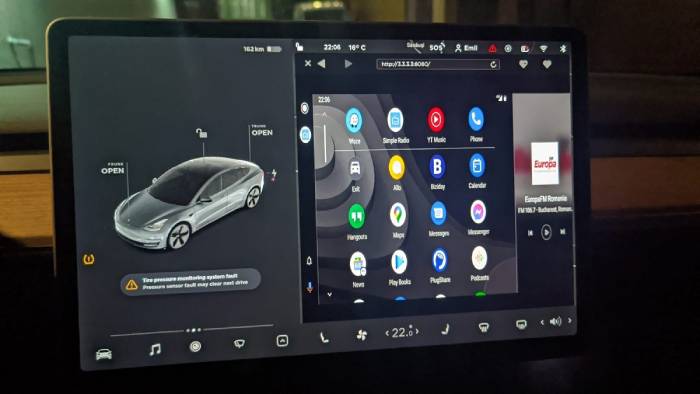 When it comes to syncing your smartphone with an In-Vehicle Infotainment (IVI) system, there are a slew of options. Android Auto, a Google-made programme that runs on your phone and projections a driving-optimized UI onto the car’s built-in dashboard, is most familiar to Android users. Tesla, on the other hand, does not offer such a projection system in its electric automobiles.

Tesla’s feature-rich dashboard runs on a proprietary Linux distribution that is intimately linked with the car’s hardware. While the modding community has yet to find a means to totally replace it with Android, Tesla owners may now enjoy the Android Auto experience thanks to TeslAA, a new app.

Emil Borconi, an Developer recognised for his work on the AAWireless project, came up with the answer. Emil offered us a sneak peek at TeslAA in June of this year. Since then, the software has undergone extensive beta testing and is now available to the general public.

TeslAA has an easy-to-understand process. You must link your phone to your automobile via Bluetooth after installing the software on your phone. Connect the Tesla Wi-Fi to your phone’s hotspot and use the Tesla browser to go to androidwheels. You should be able to view the Android Auto interface on your centre console if everything goes well.

TeslAA uses a local VPN interface to transmit the Android Auto interface from your smartphone to the Tesla dashboard’s integrated browser. If you’re having trouble setting up the VPN, you can use manual routing and set the phone’s IP to 3.3.3.3 to get TeslAA to function. The app works best with Tesla models that support Netflix, YouTube, and Disney+, according to the developer.

There are a few problems, though, that you should be aware of. The stream may become unresponsive after shifting into reverse, and the car may disconnect from the Wi-Fi hotspot if your phone loses service for an extended period of time. Despite this, the present implementation is enough for mirroring some of the greatest Android apps to your Tesla’s dashboard.

TeslAA costs $4.99 and is available for download from the Google Play Store. If you own a Tesla and want to try out Android Auto, be sure to download the software.