Friday, 28 January 2022
You are here: Home ‘The Masked Singer’ reveals the Banana Split’s identity, Here are the stars behind the masks 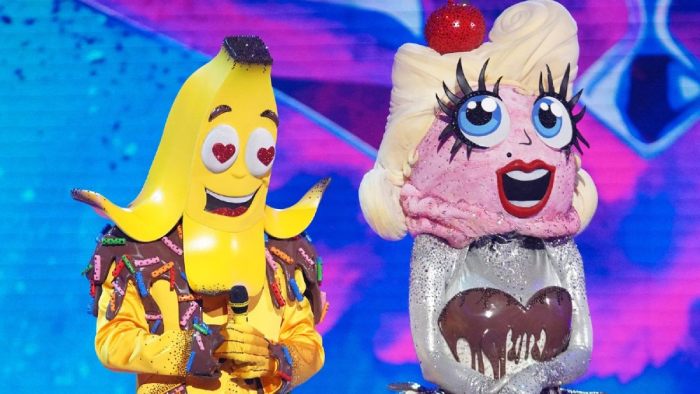 Producer David Foster and singer Katharine McPhee think the makers of “The Masked Singer” “undersold” how much fun they’d have as contestants on the hit Fox reality show. Foster stated, “We had the best time.” “No regrets.” On the twelfth episode of Season 6, “Group B Finale,” the couple was revealed as the Banana Split.

“We didn’t have any summer plans,” McPhee said. “I was five months postpartum, and COVID was raging. We just thought, what are we going to do, sit at home all summer long and just look at each other? So we did that, we looked at each other for two or three weeks straight on the show. And just had so much fun. And I was very upset that I lost that we didn’t take the whole thing home.”

“I don’t want to always come up as a runner up. You know, I’ve already done that before. I wanted to win,” where she was the Season 5 runner-up in 2006 (losing to Taylor Hicks). That’s something I’ve already done. “I was hoping to win!”

Instead, with Banana Split eliminated, the competition is now down to two finalists: Group A champion Bull and Group B victor Queen of Hearts, who will compete in the season finale next week.

Because there were only two finals, the candidates sang a second song as a duet with one of the show’s panellists after singing their original songs. Queen of Hearts was performed with Nicole Scherzinger, while Banana Split was performed with Robin Thicke.

Ken Jeong, Jenny McCarthy Wahlberg, and Nicole Scherzinger all got it right with McPhee and Foster for Banana Split, however Robin Thicke chose Ryan Tedder and Leona Lewis.

McPhee remarked of the Banana Split’s identity, “ I was kind of shocked that people figured it out as quickly as they did,”  “I just thought, I’m not that popular of a recording artist, so people won’t know my voice that well. But maybe from my ‘Smash’ years, my voice has become a little bit more recognizable. I was surprised that people guessed me as quickly as they did.”

McPhee performed “Singing in the Rain” by Arthur Freed as one-half of Banana Split, and sang “Don’t You Worry ‘Bout a Thing” by Stevie Wonder with Thicke for her duet.

Foster not only played the piano (holes in the Banana’s hand allowed him to do so), but he also assisted in the production of McPhee’s performances. Sara Bareilles’ “Gravity” and Olivia Rodrigo’s “Driver’s License” were among the songs they tried but didn’t get on the show. (However, due to clearance concerns, they were unable to do so.)

However, if McPhee and Foster get to the finals, they will not divulge the song they had in mind. “We don’t want to give it to somebody else,” Foster explained. “But it was a showstopper.”

The outfit was difficult to wear, according to McPhee: “Obviously the headpiece was very heavy,” she said. “So the heaviness of it was the biggest struggle for me, because it weighed down on me and made my breathing a little bit more shallow, which obviously affects the singing. David, they catered to his specific needs, he’s got a major claustrophobia issue. He won’t take elevators or anything. So his actual banana head was very easy to take off. He just literally just popped it off.”

The panelists — well, except Thicke — had guessed McPhee and Foster from the beginning. But other names that had been brought up over the season included J. Lo and Mark Antony, Chris Martin and Gwyneth Paltrow, Faith Hill and Tim McGraw, Emma Stone and Ryan Gosling, Craig Robinson and Ashley Tisdale, Camila Cabello and Shawn Mendes, Sara Bareilles and Josh Groban, Sutton Foster and Hugh Jackman, Jeff Goldblum and his wife Emily, Kevin Bacon and Kyra Sedgwick, Zooey Deschanel and Lamorne Morris; Ed Sheeran and Jessie J, Ryan Tedder and Leona Lewis, John Krasinski and Emily Blunt.

The show’s panellists are competing for the “Golden Ear” trophy once again, based on their initial impressions of each masked act (which McCarthy has won the last two seasons). McCarthy Wahlberg was ahead of Jeong, Scherzinger, and Thicke going into episode 12 with a point each.

This puts Jeong and Scherzinger in front of Thicke and McCarthy Wahlberg, who each have one point.

A “Take It Off” button was also introduced this season, allowing the show’s panellists to demand that a celebrity remove their mask ahead of time if they believe they know who it is. If they’re correct, they’ll gain two bonus points toward the Golden Ear total. The buzzer, on the other hand, was only used twice, and neither time was accurate. The buzzer has been turned off for the season.

The other contestant’s performance was as follows:

Song: “Bird Set Free,” by Sia
Duet: (with Nicole Scherzinger) “Dream On,” by Aerosmith
Previous song: “Born This Way,” by Lady Gaga; “La Vie En Rose,” by Edith Piaf; “River,” by Bishop Briggs; “She’s Got You,” by Patsy Cline
Nick Cannon cannon clue: “Wrestle.” “I’m not afraid, like you, to get in the ring and get a little bit dirty.”
Voice-over: “For my entire life, I wanted to have a sense of community. And I found it in some unusual and unexpected places. There was definitely a time in my life when I was living like an animal. My main concerns were where to get food, where to get shelter that’s safe. I remember this one time when I was walking down the street and I was really losing hope, and this man passed by and looked at me and darn it if that man did not reach into his pocket and hand me out a five dollar bill. That meant the world. I’ve gotten to see life from both sides now, real poor and real wealthy. And I’ve got to say, it’s the poorest people who are the most generous. ”
Panel guesses: Christina Aguilera, KT Tunstall, Paula Cole, Jewel
Previous panel guesses: Britney Spears, Kellie Pickler, Faith Hill, Carrie Underwood, Fergie, Renee Zellweger, Ireland Baldwin, Ashley Judd, Lady Gaga, Miley Cyrus, Kacey Musgraves, Jessica Simpson, Jennifer Lawrence, Jewel, Kristin Chenoweth, Kelly Clarkson, Sia