Saturday, 13 August 2022
You are here: Home ‘The Masked Singer’ discloses the identity of the Russian Dolls: Here’s the star behind the masks 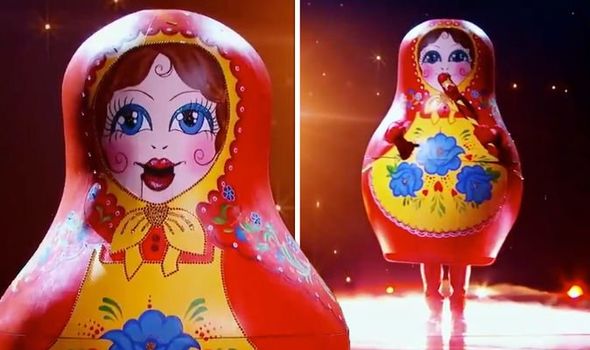 Hanson has been mmm-bop’ed off “The Masked Singer.” The pop star brothers were unmasked on Wednesday’s scene as the Russian Dolls.

The trio became the first group to compete on the show; last season, the couple Clint Black and Lisa Hartman performed as a duo under the Snow Owls costume. In any case, the Hanson brothers disclosed to Variety they were pulled in to pulling off another “Masked Singer” first. From the beginning, the show’s panelists couldn’t sort out the number of performers were in front of an audience.

“It was very clear from the beginning they loved the idea of playing the game,” Zac Hanson said. “It was, ‘Hey, let’s play with this idea of how many people are on stage.’ Whenever we could, we tried to keep playing that game. Because we know, part of the show is the spectacle of the costumes in the game of guessing. And the other part is the quality of the music and the performances. And so you want to do both as much as you can. So there were cases where there were two dolls on stage but we were all three still there, we would put two people in the big doll, which was very claustrophobic.”

Added Isaac Hanson: “We may be brothers but we don’t really need to be brothers that know each other’s smell.”

Among panelists, Nicole Scherzinger got it right for a second week in a row with Hanson, which Jenny McCarthy Wahlberg likewise speculated accurately. Ken Jeong went with an alternate family: the Jonas Brothers. Robin Thicke picked Sugarland. Visitor specialist Rob Riggle bounced on the Hanson train too, after at first guessing Devo.

Adding to the guessing game: Sometimes four Russian Dolls would be on stage. “There are certain kind of rules they’re trying to play by,” Zac Hanson said. “You don’t really want to have extra performers that are part of the actual contestant outside of the dancers and so we try to use the dancers to move the dolls, when they were off camera. There were a couple of cases where the dolls were moved on camera, or the large doll was stationary, and you didn’t really know, is there somebody in there? That was just trying to make the game more fun. At one point, there was going to be a robotically controlled fifth doll, but it apparently broke the rules. It was too much.”

Isaac Hanson said it was difficult being in the Russian Dolls, however he was appreciative he didn’t need to get familiar with any choreography: “I would say the most difficult thing about it was just being able to see where you’re going,” he said. “Your actual range of motion with regard to your feet and stuff is actually pretty limited because of the way that costume was. So in some sense, that actually played to my lack of coordination well. I wouldn’t have wanted to be asked to do much more than we did because I kept screwing up the simple things that we were doing. But the hardest part was not getting disoriented.”

“It’s kind of goes both ways,” Zac Hanson said. “On the one hand you’re proud of being able to trick people into thinking you’re somebody else. And the other hand if you have three people up there singing and harmonizing and at some point pretty quick, they don’t compare you to yourself, you’re like, ‘Hey, haven’t you thought of Hanson?!’ I think it was cool to have comparisons to really great artists from the Jacksons to Boyz II Men. There’s all kinds of different great singers that they threw out there, But I will say this, I was not expecting the public to as clearly just immediately proclaim in the chatter online you can see like episode one, they were like, ‘this is Hanson.’”

Hanson performed “I’m Still Standing” by Elton John for their final song; before that, they sang “Man in the Mirror,” by Michael Jackson; “Wonder,” by Shawn Mendes; “Want to Want Me,” by Jason Derulo; “24K Magic,” by Bruno Mars; and “Shallow,” by Lady Gaga and Bradley Cooper. Furthermore, who knows, the gathering said they may add a portion of those tracks to their tour once they hit the street once more.

“’Man in the Mirror’ is a song we love and to get to do Michael Jackson, it was a really big deal,” Zac Hanson said. “That was great because it felt like an opportunity to start strong with something that is just kind of a timeless song that we love singing. ‘24K Magic’ was one where we were really excited to do it but we definitely questioned whether we felt like we could execute it well.”

Taylor Hanson said the gathering additionally delighted in “stretching different muscles as arrangers. We could throw to one person singing one part, and do lead switching and also bring something different to the show. They hadn’t had harmony, or harmony within a group because there had never been more than two people. So we just felt like that combination of elements, really did appeal to the opportunity that also presented itself by us not being in a regular time where oftentimes we’d be on tour, and go from city to city.”

Hanson ought to have been on visit in Australia at this moment, yet the pandemic has kept them at home in Oklahoma. All things being equal, they’re presently releasing new music — a tune each month — that will ultimately be arranged into another collection, “Against the World.” The group notes that they’re additionally going to commend their 30th anniversary performing together.

“All of these songs on ‘Against the World,’ they do talk about hard issues and there’s a hopeful quality to it, but about conflict and challenges, and overcoming yourself,” Zac Hanson said. “And I think it’s a great project to let people look at each song for a little longer to linger on each story, because they do have something to say.”

New this season is the masked celebrity “Cluedle-Doo,” who has been offering extra clues about every contestant. Scherzinger got it very well may be regular visitor specialist Joel McHale.

The show’s panelists are likewise once going after a “Golden Ear” trophy dependent on their initial impressions of each masked performer (which McCarthy won last time). Jeong and McCarthy Wahlberg each had two focuses heading into this episode.

Scherzinger’s initial guess was the whole cast of “Glee.” Thicke went with the Black Eyed Peas (explicitly, Will.i.am and Fergie). McCarthy Wahlberg named Boyz II Men. Jeong’s initial feeling was Donny and Marie Osmond. No one picked up another point.

Here are the leftover contestants and what they performed on Wednesday’s scene, “The Quarter Finals — Five Fan Favorites”:

Song: “Thinking Out Loud,” by Ed Sheeran
Super Fan Super Clue: “Cher. We’ve both been a part of iconic fantasy films. And she was a part of my world the very first time I shared my voice.”
Swan’s Mailbox: “You’re mega-talented. I’ll never forget when you were on Oprah, and so excited you recently got the major recognition you deserved.”
Panel guesses: Dua Lipa, Normani
Previous songs: “Barracuda,” by Heart; “In My Blood,” by Shawn Mendes; “How Will I Know,” by Whitney Houston, “Use Somebody,” by Kings of Leon; “Do I Do,” by Stevie Wonder
Previous panel guesses: Anya Taylor-Joy, Camilla Cabello, Leona Lewis, Demi Lovato, Lindsay Lohan, Ashlee Simpson, Emily Osment, Victoria Justice, Brenda Song, Kesha, Demi Lovato, Becky G, JoJo, Christina Milian, Mandy Moore