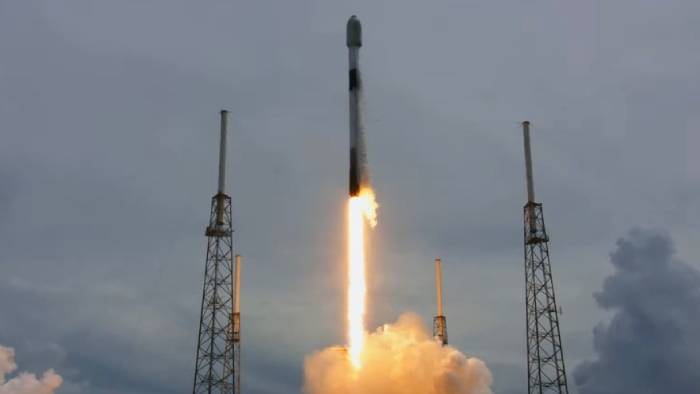 At 10:25 a.m. Eastern, the Falcon 9 rocket lifted off from Space Launch Complex 40 at the Cape Canaveral Space Force Station in Florida. The upper stage entered orbit eight and a half minutes later and deployed its payloads into a 525-kilometer sun-synchronous orbit over the next half-hour after a second burn 55 minutes after liftoff.

The Falcon 9 first stage landed in Landing Zone 1 at Cape Canaveral, marking the first time a Falcon 9 rocket has landed on the ground since the Transporter-2 rideshare mission in June 2021. The booster was on its tenth flight, having launched for the first time in May 2020 on NASA’s Demo-2 commercial crew mission. Before Transporter-3, it launched the ANASIS-2 satellite, the CRS-21 cargo mission, Transporter-1, and five Starlink missions.

According to SpaceX, the launch contained 105 satellites. Planet, an Earth observation firm, was the greatest single customer in terms of spacecraft flown, with 44 SuperDove spacecraft.

Planet was one of several businesses who used the launch to restock or expand its constellations. On Transporter-3, Spire had four multifunctional Lemur satellites, while Kepler deployed three for its satellite connectivity array. Capella Space, Iceye, and Umbra, all synthetic aperture radar businesses, had spacecraft on the flight as well.

On Transporter-3, Unseenlabs, a French company creating a satellite system for maritime domain awareness, launched BRO-5, its fifth satellite. Clément Galic, CEO of Unseenlabs, said in a statement, “The deployment of BRO-5 enables us to strengthen our international activities.”

There were also newbies. OroraTech, a German startup, has launched the first in a series of cubesats outfitted with thermal infrared cameras to provide early wildfire alerts. The satellite was created in collaboration with Spire.

“With the current demonstration mission, OroraTech wants to prove that the technology is suitable for use in space,” said Wolfgang Neubert of APEX Ventures, an OroraTech investor, in a company statement. “The first data will show what will be possible in the future and pave the way to improved coverage and more accurate predictions.”

The Dubai Electricity and Water Authority (DEWA) launched a three-unit cubesat aboard Transporter-3, claiming it to be the first utility-launched nanosatellite. DEWA-SAT 1 will be used to connect its electrical and water infrastructure to the internet of things.

DEWA-SAT 1 was one of three NanoAvionics satellites on Transporter-3. The second was HYPSO-1, a six-unit cubesat for ocean science studies at the Norwegian University of Science and Technology. ETV-A1, a 16-unit cubesat created for Sen, a firm that wants to broadcast ultra-high-definition television from orbit, was the third. ETV-A1 weighed more than 29 kilos, making it NanoAvionics’ biggest satellite to date.

Many of the satellites on the launch were organised by aggregators including D-Orbit, Exolaunch, and Spaceflight, including D-ION Orbit’s Satellite Carrier, which will subsequently release its payloads. On Transporter-3, Spaceflight had planned to fly a Sherpa tug, but it had to be removed from the mission after its chemical propulsion system leaked during launch processing.

One of the Sherpa’s ten satellites, VZLUSAT-2 from the Czech research institution VZLU, was instead flown by D-Orbit. On Transporter-3, three Umbra satellites and an unknown customer — presumed to be Capella Space — remained. Most of the other payloads initially scheduled to launch on Transporter-3, according to Spaceflight spokesman Jodi Sorensen, have been remanifested on other flights.

Following two previous specialised ridesharing trips in January and June 2021, the Transporter-3 mission was launched. On Starlink launches, the business has also flown some satellites as secondary payloads. The low cost of rideshare payloads offered by SpaceX has made those missions a major competitor for a rising number of small launch vehicle providers who offer greater control over orbit and schedule at much higher prices.

This year, SpaceX is planning three additional dedicated rideshare launches. Kleos, a Luxembourg-based startup constructing a constellation of radio-frequency monitoring satellites, said on Jan. 13 that its next cluster of smallsats will be launched in April on SpaceX’s next dedicated rideshare mission, Transporter-4. Kleos had intended to launch those satellites via Spaceflight on Transporter-3.