Thursday, 18 August 2022
You are here: Home Separating the expanding influences of Yankees-Astros rainout 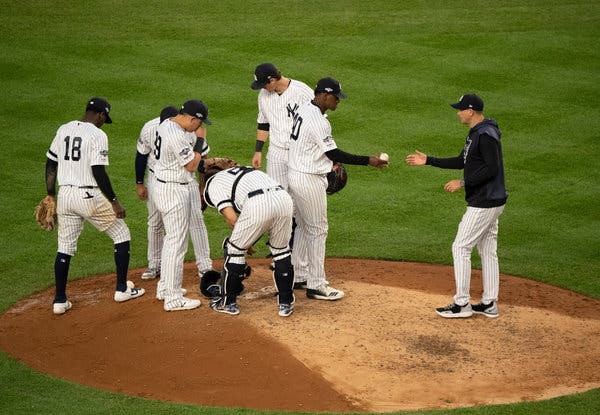 On one hand, without a doubt the Yankees ought to have spent another $200 million or whatever it would have cost to toss a retractable rooftop on their Stadium.

On the other? Climate frequently turns into a fun piece of postseason legend.

Possibly the 2004 Red Sox don’t leave a mark on the world by conquering a 0-3 American League Championship Series deficiency against the Yankees without pushing their opponents’ pitching staff for five straight days following a rainout of Game 3. Also, would the Cubs be at 110 years without a title if a downpour delay in 2016 World Series Game 7 hadn’t allowed Aroldis Chapman’s partners to recuperate from Rajai Davis’ challenge tying, two-run homer?

Which carries us to Wednesday’s deluge that postponed Game 4 of the current ALCS to Thursday night, getting under way a potential four-day, four-game celebration between the Yankees and the Astros, the initial two in The Bronx and the last two (if necessary) at Minute Maid Park, with the Yankees trailing by a 2-1 tally.

Whom does this unscheduled break help more? How about we spread out the noticeable far reaching influences and rank them by significance.

“I’m certainly open to them running out there every day,” Aaron Boone said Wednesday in a conference call. “But it’s something that’s kind of always fluid with the different individual pitchers and how they’re able to bounce back.”

Perhaps they’d pull off it, yet as Boone’s antecedent Joe Girardi would state, it’s not what you need. Furthermore, remember, if the Yankees by one way or another destruction the Astros, they’d at present need to take on the Nationals in the World Series and ask much more from their late-inning folks.