Tuesday, 27 September 2022
You are here: Home Sarah Bloom Raskin will be nominated by Biden to be the Fed’s vice chair for supervision, while Lisa Cook and Philip Jefferson will be governors 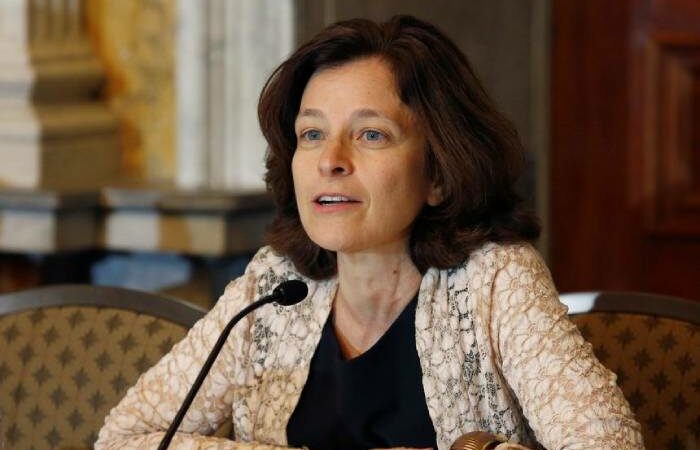 According to persons familiar with the matter, President Joe Biden will name Sarah Bloom Raskin to be the Federal Reserve’s next vice chair for supervision, probably the nation’s most influential banking regulator.

According to persons who asked not to be identified in order to speak freely, Biden will also nominate Lisa Cook and Philip Jefferson to serve as Federal Reserve governors.

The Senate Banking Committee, which is in charge of vetting presidential candidates to the central bank, will interrogate each nominee in the following weeks. If their nominations are confirmed by the Senate, Cook will become the first Black woman to serve on the Federal Reserve Board of Governors, while Jefferson will become the fourth Black male to do so.

Biden looks to make good on Democrats’ promises to strengthen laws passed in the aftermath of the financial crisis and restore aspects of a rule named after former Fed Chair Paul Volcker that limited banks’ ability to trade for their own profit by assigning Raskin to the vice chair for supervision post.

Raskin has prior Fed experience, having served as a governor from 2010 to 2014 before becoming the Obama administration’s deputy secretary of the Treasury. Rep. Jamie Raskin, D-Md., is her husband.

Powell and Brainard are likely to breeze through the Senate with bipartisan backing, but Raskin, Cook, and Jefferson may face more difficult confirmation odds. Senator Pat Toomey of Pennsylvania, the ranking member of the Banking Committee, was quick to criticise Biden’s recent picks.

“Sarah Bloom Raskin has specifically called for the Fed to pressure banks to choke off credit to traditional energy companies and to exclude those employers from any Fed emergency lending facilities,” he said in a statement released Thursday evening. “I have serious concerns that she would abuse the Fed’s narrow statutory mandates on monetary policy and banking supervision to have the central bank actively engaged in capital allocation.”

“I will closely examine whether Ms. Cook and Mr. Jefferson have the necessary experience, judgment, and policy views to serve as Fed Governors,” he added.

Cook’s nomination was anticipated, although Jefferson’s name had only lately came up in closed-door negotiations about becoming governor. Sen. Sherrod Brown, the chairman of the Banking Committee and an Ohio Democrat, said in May that she was his top candidate for governor.

Cook is a Michigan State University economics and international relations professor. She’s also a member of the Center for Equitable Growth’s steering committee, a progressive think tank in Washington that boasts several of Biden’s best economists among its alumni. She also worked for the Obama administration’s Council of Economic Advisors as a senior economist.

Meanwhile, Jefferson serves as Davidson College’s vice president for academic affairs and dean of faculty. His academic career has centred on labour markets and poverty for decades.

A 2005 study on the costs and advantages of monetary policy that supports a “high-pressure economy,” in which the Fed provides easier access to cash and lowers interest rates to drive tighter labour markets, is one of his most notable publications.

In general, and barring exceptional economic conditions, he and other economists, including Brainard, have argued that the additional advantages of lower rates on maximum employment outweigh the risk of higher inflation.

Raskin has encouraged the Federal Reserve and other financial authorities to take a more aggressive role in addressing the financial risks presented by climate change since leaving the government.

“While none of its regulatory agencies was specifically designed to mitigate the risks of climate-related events, each has a mandate broad enough to encompass these risks within the scope of the instruments already given to it by Congress,” Raskin wrote in September.

“In light of the changing climate’s unpredictable – but clearly intensifying – effects on the economy, U.S. regulators will need to leave their comfort zone and act early before the problem worsens and becomes even more expensive to address,” she added.

Randal Quarles, the former Vice Chair for Supervision who recently left the Fed, was instrumental in lowering capital requirements for US banks with less than $700 billion in assets and relaxing the Volcker Rule’s audit rules for trades executed by JPMorgan Chase, Goldman Sachs, and other investment banks.

Officials from the Federal Reserve who prefer a more relaxed regulatory approach claim that the industry is well-capitalized and does not require some of the more restrictive regulations adopted in the aftermath of the financial crisis.

Many Democrats, particularly Massachusetts Senator Elizabeth Warren, have fought back, claiming that the rollbacks make the financial sector more exposed to shocks and prone to risky behaviour.

The nominees come at an important moment for the Fed, which has begun to taper its easy-money policies in recent weeks in the face of improving employment and the highest year-over-year inflation since 1982.

When the Fed wants the economy to pick up, it can lower borrowing costs in order to boost the housing market, as well as overall economic activity and employment. It can, however, boost interest rates to make borrowing more expensive if it is concerned about an overheating economy or uncontrollable inflation.

In times of economic crisis, the central bank can also use its broader powers to buy large amounts of bonds, lowering borrowing costs and boosting financial markets by providing easy access to capital. With the coming of the Covid-19 epidemic in 2020, it was able to do so, calming dealers and companies concerned about liquidity.

Bond yields decrease when bond prices rise, implying that their purchases pushed rates down. However, removing emergency liquidity measures — as well as the potential of higher rates — can have the opposite effect on markets.

The release of the Fed’s last meeting minutes earlier in January provoked a sell-off on Wall Street, with numerous officials advocating for reducing the balance sheet and boosting rates shortly.