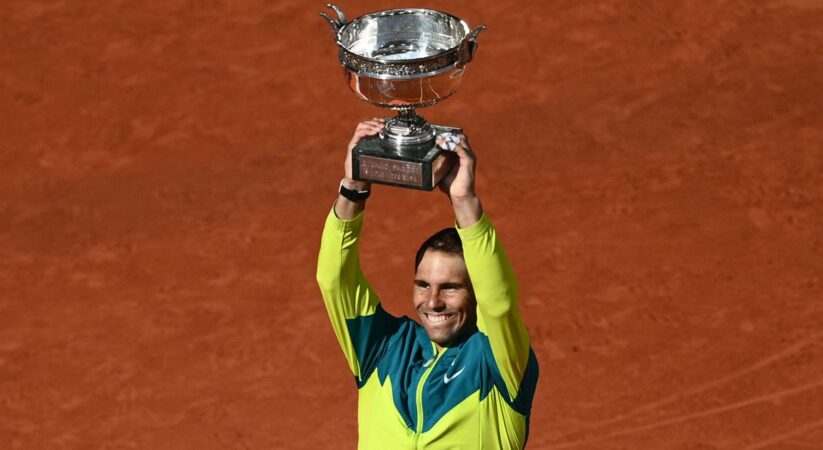 Rafael Nadal is still dominating his favourite tennis tournament at the ripe old age of 36, seventeen years after winning his first French Open title in 2005.

With a 6-3, 6-3, 6-0 triumph over 23-year-old Casper Ruud of Norway, the Spaniard won his 14th Roland Garros title and a record-extending 22nd major trophy, tying the mark for fewest games conceded in a major final. He made history by becoming the oldest man to win the French Open.

Larry David, Hugh Grant, and Stefan Edberg were also in attendance, as were King Felipe VI of Spain and His Royal Highness Crown Prince Haakon of Norway, who sat next to each other while watching the match.

Nadal, who won the Australian Open in January, now has a two-slam lead over Novak Djokovic and Roger Federer, who are both 20 years old.

“I didn’t think he would last until 36,” John McEnroe said on NBC, pointing out that both Federer and Serena Williams won their final majors at the age of 36.

Despite a chronic foot problem that prompted him to limp off the court after losing to Denis Shapovalov in Rome and has prompted talk of retirement, Nadal has looked like his old self in the last two weeks. At the French Open, he improved to 112-3, including 28-1 in the semi-finals and finals. Nadal currently has a perfect 14-0 record in French Open finals and a 22-8 record in Grand Slam finals.

To put it in context, Pete Sampras won 14 major championships throughout his Hall of Fame career and is widely regarded as one of the best tennis players of all time. Nonetheless, Nadal, Federer, and Djokovic have won 61 of the last 73 majors, surpassing him by a significant shot.

Looking towards his box, Nadal said, “Team, family, everybody who is there, it’s just completely amazing the things that are happening this year, so I just can thank you very, very much for all the things that you are doing with me and you did over the years, no? Without you, nothing of this will be possible, without any doubt no? Especially in the very tough moment that we went through in terms of injuries.

“If I don’t have a great support from team, family, everybody that have been next to me, nothing of this will be possible because I will be retired much before so many, many thanks for everything.”

He added: “I don’t know what can happen in the future but I’m going to keep fighting to try to keep going, so many thanks. Thank you very much, everyone.”

Nadal has a chance to win the calendar Grand Slam, but his Wimbledon status is still up in the air. Because he suffers from Mueller-Weiss syndrome, a rare degenerative condition that affects the bones in the feet, Nadal had repeated anaesthetic injections throughout the French Open.

He also stated that he “doesn’t want to keep playing” if he needs injections.

Nadal plans to have radiofrequency ablation – which utilises heat on the nerve to relieve long-term pain – in the next week, but if it doesn’t work, he’ll have to contemplate surgery.

“That is what we are planning to do in the next week,” he said. “It’s going to be a radiofrequency injection on the nerve to try to burn the nerve a little bit and create the impact that I have now.”

Wimbledon will be without a number of notable players, including Alexander Zverev, who tore ligaments in his semifinal against Rafael Nadal while chasing down a forehand by the Spaniard; Russian stars Daniil Medvedev and Andrey Rublev, who are banned following Russia’s invasion of Ukraine; and Roger Federer, who hopes to return at least once more in 2023.

Nadal got to his 14th final by navigating the much tougher top half of the draw. He defeated four seeded players, including No. 9 Felix Auger-Aliassime in five sets, world No. 1 and defending champion Djokovic in four sets, and No. 3 Zverev in an emotional win in which the German tore ligaments in his right ankle trying to run down a Nadal forehand.

Ruud had won 10 matches in a row and 13 of 14 going into the final, and had led the tour with seven clay court titles since the start of 2020.

However, Nadal is Ruud’s idol, and he has a history of getting himself into problems.

Nadal made an early statement by breaking Ruud with a buggy whip forehand winner in his first service game to go up 2-0. Nadal earned a second break of Ruud for 4-1 after a difficult game in which he was broken himself. He closed up the set with a service winner when serving at 5-3.

Ruud raced out to a 3-1 lead in the second set with an early break and appeared to be gaining ground. However, Nadal reeled off five straight games to take the second set on his fourth set point after Ruud double-faulted, putting him down two sets to love.

During the second and third sets, Nadal won 11 consecutive games. With Ruud serving at 0-5 in the third set, Nadal broke again, this time with a backhand up the line and a handshake with Ruud at the net.

“It’s your 14th time here, 22nd all-around in Grand Slams and we all know what a champion you are,” Ruud said. “And today I got to feel how it is to play against you in a final and it’s not easy.

“I’m not the first victim, I know there have been many before.”

He added: “You are a true inspiration for me, for everyone who follows tennis around the world, so we all hope that you will continue for some more time.”