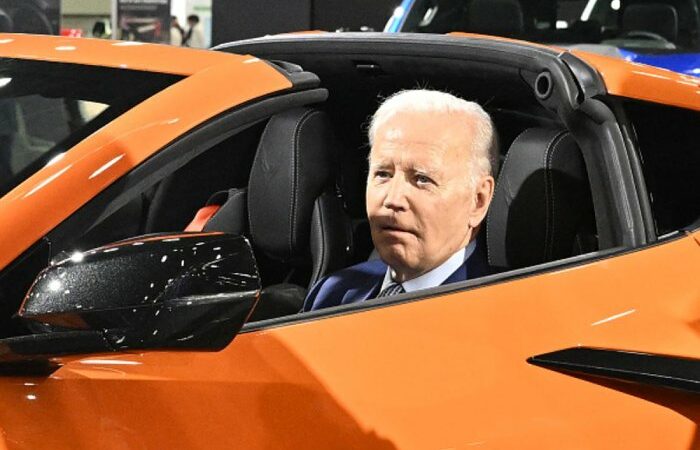 During a visit to the Detroit auto show on Wednesday, President Biden, a self-described “gearhead” who owns a vintage Corvette, highlighted his administration’s initiatives to promote electric vehicles and announced hundreds of millions of dollars to build roughly 500,000 charging stations across dozens of states.

In order to promote the massive new climate, tax, and healthcare package that provides tax benefits for purchasing electric vehicles, Mr. Biden arrived at the enormous North American International Auto Show. He greeted union workers, CEOs, and local authorities while touring a variety of hybrid, electric, and combustion automobiles made in the United States by Chevrolet, General Motors, Ford, and Stellantis.

Even while Mr. Biden has been given credit for the recent surge of battery and assembly plant announcements for electric vehicles, the majority of them were already in the works before the Inflation Reduction Act was passed on August 16. The 2021 infrastructure bill proposed by Mr. Biden, which provides $5 billion over five years to assist states in developing a network of EV charging stations, may be a factor.

Mr. Biden revealed in Detroit that the first $900 million in infrastructure funding had been approved for the installation of EV chargers along 53,000 miles of the nation’s highway system and in 35 states.

“The great American road trip is going to be fully electrified. Whether you’re driving coast to coast along I-10, or on I-75 here in Michigan, charging stations will be up and as easy to find as gas stations are now, ” Speaking to an audience of supporters and autoworkers, the president stated.

According to the law, in order to qualify for a new federal tax credit of up to $7,500, electric vehicles must be manufactured in North America. There are specifications for the production of battery minerals in North America, as well as for the manufacture of batteries for qualifying vehicles. The credits are intended to establish a U.S. supply chain for electric vehicles and eliminate reliance on foreign nations, primarily China.

The measure’s passage prompted a wild dash by manufacturers to locate North American-made batteries and battery minerals from the U.S., Canada, or Mexico in order to ensure that EVs qualify for the credit.

Each business revealed plans for three EV battery plants, all of which were joint ventures with battery manufacturers, well before lawmakers reached an agreement on the legislation. In Warren, Ohio, a GM battery plant has already begun producing. GM’s battery plants will be built with the aid of a government loan announced in July.

Ford said in September of last year that it would produce the newest electric pickup trucks at a facility in Tennessee, and GM has announced the opening of EV assembly facilities in Lansing, Michigan; Spring Hill, Tennessee; and Orion Township, Michigan. Stellantis, formerly known as Fiat Chrysler, announced in May that it would build a battery facility in Canada and another joint venture in Indiana.

In May, Hyundai announced the building of battery and assembly facilities in Georgia, while in July, VinFast, a Vietnamese manufacturer, announced the opening of facilities in North Carolina. Although they were planned for months, Honda and Toyota both announced U.S. battery plants after the act was approved.

Building a local EV supply chain is important, and Mr. Biden has been emphasising this for a while. This may have encouraged some companies to establish their operations in the United States. But because batteries are bulky and expensive to ship from abroad, it is also advantageous to build them close to the assembly line for EVs.

And despite the high cost of batteries, automakers are introducing more cheap electric options. The newest model, a Chevrolet Equinox small SUV, was released by General Motors last week. It starts at roughly $30,000 and has a 250-mile range on a single charge. If buyers pay more, they can have a 300-mile range.

The Equinox verifies everything was manufactured in North America. Mexico will produce it. The company won’t disclose the location of the battery’s manufacturing, but it is striving to meet the other requirements for the tax credit.