Saturday, 4 February 2023
You are here: Home Parker Solar Probe, a NASA spacecraft, becomes the first to ‘touch’ the sun 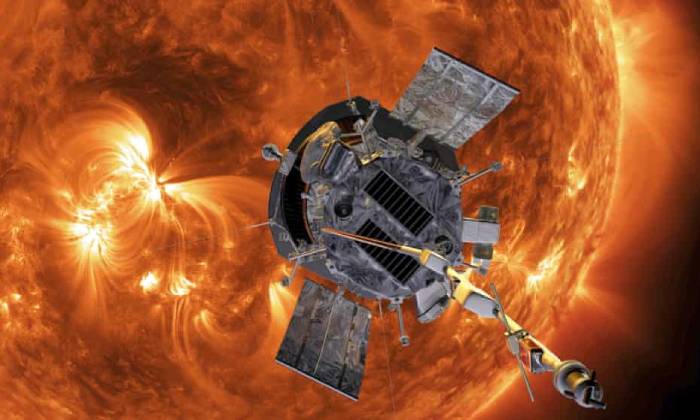 “Not only does this milestone provide us with deeper insights into our Sun’s evolution and (its) impacts on our solar system, but everything we learn about our own star also teaches us more about stars in the rest of the universe.”

On Tuesday, the news was made at the American Geophysical Union’s Fall Meeting in New Orleans, and research from the solar milestone was published in Physical Review Letters.

The Parker Solar Probe was launched in 2018 with the goal of getting closer to the sun. Scientists, notably Eugene Parker, the spacecraft’s namesake astrophysicist, want to learn more about the solar wind, which blows out from the sun and flings energetic particles across the solar system.

The sun’s corona is far hotter than the star’s real surface, and the spacecraft may be able to explain why. At its hottest point, the corona reaches one million degrees Kelvin (1,800,000 degrees Fahrenheit), while the surface is around 6,000 Kelvin (10,340 degrees Fahrenheit).

The spacecraft has already made some surprise discoveries about the sun, such as the discovery of switchbacks, or magnetic zig-zag patterns in the solar wind, in 2019.

Parker’s most recent close approach to the sun has now assisted scientists in determining that these switchbacks originate on the solar surface.

Parker Solar Probe will have made 21 near encounters to the sun throughout the course of its seven-year mission. In 2024, the probe will orbit the solar within 3.9 million miles of its surface, putting it closer to the star than Mercury, the closest planet to the sun.

Although this appears to be a long distance, researchers compare it to the probe being on the four-yard line of a football field, with the sun as the end zone.

The 412-inch-thick carbon-composite solar shields will have to resist temperatures of close to 2,500 degrees Fahrenheit when they are closest to the sun. The spacecraft’s interior and instruments, on the other hand, will remain at a comfortable room temperature.

In a statement, Nour Raouafi, Parker project scientist at the Johns Hopkins Applied Physics Laboratory in Laurel, Maryland, said, “Flying so close to the Sun, Parker Solar Probe now senses conditions in the magnetically dominated layer of the solar atmosphere — the corona — that we never could before.”

“We see evidence of being in the corona in magnetic field data, solar wind data, and visually in images. We can actually see the spacecraft flying through coronal structures that can be observed during a total solar eclipse.”

Getting up close with a star

Parker’s team discovered their spacecraft had passed the boundary and entered the solar environment for the first time in April.

It happened when the spacecraft made its eighth flyby of the sun and recorded magnetic and particle conditions particular to a boundary 8.1 million miles above the sun’s surface where the enormous solar atmosphere ends and the solar wind begins.

In a statement, Justin Kasper, lead study author, University of Michigan professor, and deputy chief technology officer at BWX Technologies, Inc., said, “We were fully expecting that, sooner or later, we would encounter the corona for at least a short duration of time.” “It is very exciting that we’ve already reached it.”

Things were quiet as the spaceship went through the pseudostreamer, as if it were in the eye of a storm. As it travels through the solar wind, Parker is blasted with particles. Particles moved slower in this example, and the zig-zagging switchbacks were reduced.

During its next flyby in January, the spacecraft will most likely pass into the corona.

In a statement, Nicola Fox, division director for NASA’s Heliophysics Division, stated, “I’m excited to see what Parker finds as it repeatedly passes through the corona in the years to come.” “The opportunity for new discoveries is boundless.”

As the sun’s 11-year cycle heats up with activity over the next few years, Parker is likely to be in the right position at the right time during subsequent flybys. The sun completes a solar cycle of calm and stormy activity every 11 years and begins a new one.

Space weather created by the sun, such as solar flares and coronal mass ejection events, can have an impact on the electrical grid, satellites, GPS, airlines, rockets, and humans in space, therefore understanding the solar cycle is critical.

The latest solar cycle, which began in December 2019, is expected to reach its peak in July 2025, implying a rise in solar activity.

This means that the corona’s outside edge will extend, giving Parker more opportunities to fly into the sun’s strange outer atmosphere.

“It is a really important region to get into because we think all sorts of physics potentially turn on,” Kasper said. “And now we’re getting into that region and hopefully going to start seeing some of these physics and behaviors.”