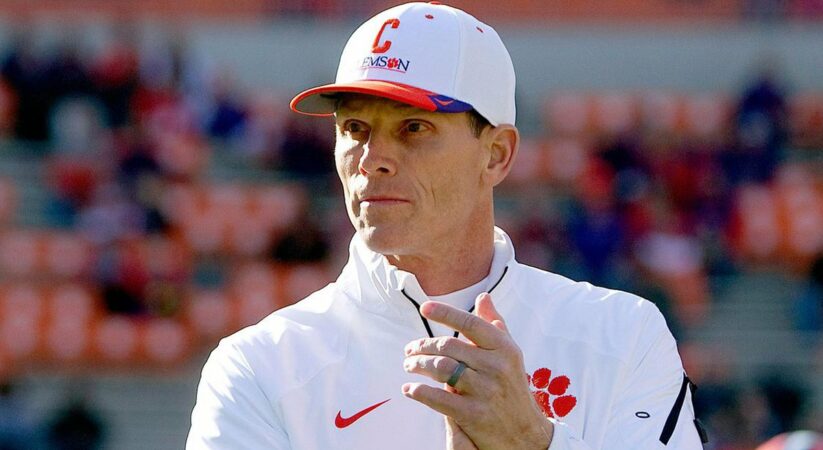 Brent Venables, the defensive coordinator at Clemson, has been named the new head football coach at Oklahoma, according to the university.

After OU athletic director Joe Castiglione travelled to the Clemson, South Carolina, region to meet with Venables, who had emerged as the Sooners’ top target, a deal was reached Sunday night. Venables returned to Oklahoma Sunday night with the Oklahoma contingent and will be properly introduced Monday morning.

“This is an incredibly special opportunity,” Venables said in a statement released by Oklahoma, calling the Sooners “one of the winningest and most tradition-rich programs in college football history.”

“There’s no question we are equipped to compete at the very highest level and attract the best players from across the country. The OU logo has never been stronger.”

Venables was named the Broyles Award winner for best assistant coach in college football in 2016 while at Clemson. In previous years, he had turned down many head-coaching openings in order to remain at Clemson.

“This is a truly great day for Oklahoma,” Castiglione said in a statement released by the school. “A born leader, [Venables] helped build and sustain an exceptional culture during his 13 years here at Oklahoma and his 10 seasons at Clemson. He has a track record of establishing meaningful relationships with his players and preparing them for the next level. Brent embraces competition and the challenges that come with it, and there is no doubt in my mind he is the right man to lead OU football into its next great era.”

Venables intends to appoint Ole Miss offensive coordinator Jeff Lebby as the Sooners’ offensive coordinator, according to ESPN sources. After signing to play at Oklahoma but suffering an injury that terminated his playing career, Lebby spent four years as a student assistant after signing to play there but suffering an injury that ended his playing career. At Ole Miss, Lebby worked under Lane Kiffin and called the offensive plays for the Rebels, who finished fourth nationally in total offence this season (506.7 yards per game).

Oklahoma was also interested in Cincinnati’s Luke Fickell, but the timing didn’t work out for Fickell, whose Bearcats won the American Athletic Conference championship game Saturday and are headed to the College Football Playoff.

Lincoln Riley, who departed to take the USC position the day after Oklahoma’s 37-33 Bedlam loss to Oklahoma State, was replaced by Venables, 50. For the third time in a row, Oklahoma hired an assistant coach as its head coach. Before being promoted, Riley was the offensive coordinator for the Sooners under Bob Stoops. Before becoming the head coach at Oklahoma in 1999, Stoops was the defensive coordinator at Florida.

Venables is “the perfect guy to get us to the next level,” according to Stoops, who is presently serving as the Sooners’ interim coach.

“He knows the formula to win national championships and has the toughness, the attitude and the fight that I think will elevate our program in a lot of positive ways,” Stoops said in the school’s release. “I’ve always loved his energy, excitement and passion for the game — it clearly spills over to his players. He has the absolute right experience to come in at this time and really boost our program.”

Venables will assist Oklahoma football usher in a new era, as the Sooners are expected to join the SEC as early as the 2023 season. Venables’ defence allowed a total of three points in two games against SEC opponents this season (Georgia and South Carolina).

In a statement, Oklahoma president Joseph Harroz Jr. remarked, “Coach Venables is the perfect leader for the next exciting chapter of Oklahoma football as we look ahead to a new era of competition.” “With his years of experience in building up teams and winning championships, I have high confidence in the unlimited potential of our programme under his leadership. He knows what OU football is all about because he’s lived it, and there’s no doubt he is up to the task .”

Defensive end for Clemson Xavier Thomas tweeted late Sunday: “So happy for coach. He deserves it more than anyone. Hardest working man I have ever known. Y’all take care of him!!”

“Brent Venables has been the most significant assistant coach in any sport in Clemson athletics history,” Tim Bourret, Clemson’s former football communications director who has been a member of Clemson athletics for more than 40 years, tweeted.