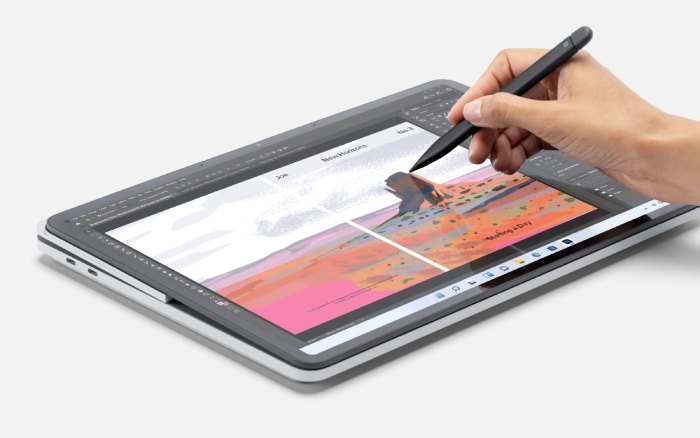 Microsoft has announced that its annual fall Surface event will take place next month on October 12 at 10 a.m. Eastern Time. According to the website, “watch live to see what’s next,” this may be the business’s first live hardware event since 2019.

Whether the event will take place live streamed from a set venue or in person with press attendance is currently unknown.

Expect to see a brand-new Surface Pro 9 that unifies Intel and ARM variants under one roof, as well as possibly some brand-new hues, such as Sapphire (blue) and Forrest (green), in addition to the Graphite and Platinum colours we’ve had on Surface Pro for a while.

Designers also anticipate the release of a new Surface Laptop, while current rumours indicate that just an Intel model will be available this fall. Although Intel 12th-generation chips are anticipated to be included, there are currently no more information about the hardware. Maybe this fall’s update to the Laptop will be a Laptop 4+ rather than a Laptop 5, given that we might only be getting an Intel variant?

The last significant item you anticipate seeing is a new Surface Studio 3, the accessories for which have already been spotted in leaks. Since the final Surface Studio model shipped in 2018 with an antiquated Intel 7th-generation CPU, it is well past due for an upgrade. Hopefully, the Surface Studio 3 will have an Intel processor from a more current generation and an NVIDIA GPU.

A new set of Surface Earbuds, updated Type Cover accessories with patterns, and Project Volterra, the Windows on ARM devkit that was announced earlier this year but hasn’t yet been released, are some other smaller products you might see.

They’re excited to see how Microsoft commemorates the tenth anniversary of Surface this fall. A fantastic approach to mark the event will be to introduce new Surface Pro colour options and integrate Surface Pro X with the primary Surface Pro range.

Keep it tuned to Windows Central over the next few weeks as we’ll be covering the event live as it happens.