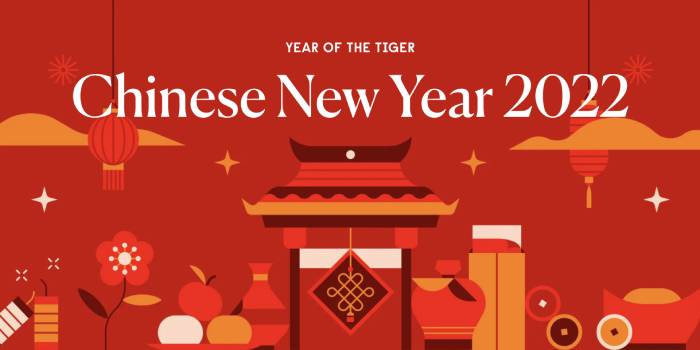 The Lunar New Year, which is celebrated by approximately 2 billion people around the world, falls on Tuesday, Feb. 1, 2022, with festivities lasting up to a week.

With family reunions, parades, and pyrotechnics to ward off evil spirits, it’s traditionally a time to celebrate ancestors and deities. While Lunar New Year is based on the Chinese lunar calendar, it is also observed in Korea, Singapore, Mongolia, Tibet, Vietnam, and other Asian communities around the world.

Qin Gang, China’s ambassador to the United States, issued a Lunar New Year statement on Sunday, urging Americans and Chinese to “further our friendship in the new era.”

Qin also praised the 2022 Winter Olympics, which will begin on February 4 in Beijing, stating that he hopes athletes and spectators would “feel its TIGER feature, which means Tense, Inclusive, Green, Extraordinary and Refreshing.

Here’s all you need to know about the Year of the Tiger and the Lunar New Year. For more on China, read up on the Winter Olympics, which begin this week in Beijing, and the country’s nuclear energy expansion.

Because many Asian cultures have historically used a lunar calendar rather than a solar calendar, the Lunar New Year occurs on a different day each year on the Gregorian calendar: in 2022, Lunar New Year’s Eve will be on Jan. 31, and the new year will begin on Tuesday, Feb. 1.

Though festivities often begin the weekend before and go for weeks, only the first seven days, from January 31 to February 6, are designated as public holidays.

The Lantern Festival, which occurs on the first full moon of the year, marks the end of the New Year season in China. It falls on the 15th day of the first month of the Chinese calendar, which falls on February 15 this year.

What is the Lunar New Year?

The Lunar New Year is celebrated as more than just the start of a new calendar year; it is also a time of reunion and rebirth, signalling the end of winter and the beginning of spring.

According to one tradition, at the start of each year, a monster would rise from beneath the Earth and devour the villagers. Because the monster, known as Nian (Chinese for “year”), was terrified by bright lights, loud noises, and the colour red, they were employed to drive him away, and have since been synonymous with the celebration.

This year, which Chinese Zodiac animal is honoured?

Each year of the Chinese calendar is associated with one of a dozen animals: the rat, ox, tiger, rabbit, dragon, snake, horse, goat, monkey, rooster, dog, or pig.

The year 2022 has been designated as the Year of the Tiger in the Gregorian calendar.

“In Chinese culture, the tiger is the symbol of bravery, wisdom and strength. But interestingly, the tiger is not mentioned in the Bible, while the lion, a Western astrological sign, is absent from the Chinese zodiac,” Qin said. “Different places and peoples have different cultures. This is only natural, but such differences should not prevent us from understanding, respecting and appreciating each other’s history, culture and tradition.”

What personal qualities do people born in the Year of the Tiger have?

The tiger, not the lion, is the king of the jungle in Asian cultures, and those born during a Tiger Year are regarded to be natural leaders who are fearless and thrill-seeking, with a strong desire for attention.

According to the Victoria and Albert Museum in London, “They are courageous and energetic, love a challenge or competition and are prepared to take risks.” “They can also be rebellious, short-tempered and outspoken, preferring to give orders rather than take them, which often leads to conflict.”

What do people do to celebrate the Lunar New Year?

Different Asian civilizations have different means of ringing in the new year: The Lunar New Year in Vietnam is known as Tt, and it is celebrated by the consumption of special dishes such as bánh chung (sticky rice cakes), bushels of yellow ochna flowers, and visits to friends, relatives, and neighbours.

Americans are most familiar with Chinese New Year celebrations, in which the arrival of the new year is marked by dragon parades, boat races, and pyrotechnics and firecrackers to ward off bad luck.

On the Lunar New Year, many people wear red and children are given red envelopes loaded with money, which signify good fortune.

The Lantern Festival marks the end of the New Year season with the release of paper lanterns and the consumption of tangyuan, a glutinous rice ball dumpling Chinese treat.

To honour deceased relatives, many families will arrange feasts, clean their homes thoroughly, and pay visits to shrines.

The COVID-19 pandemic has prompted more subdued celebrations, as it did last year, with remarks from former US President Jimmy Carter at the Chinese Embassy in Washington, an exhibition of Chinese lanterns and a light show at the Kennedy Center, acrobatics and winter sports demonstrations, and a reunion of giant pandas Mei Xiang, Tian Tian, and Xiao Qi Ji at the Smithsonian’s National Zoo.