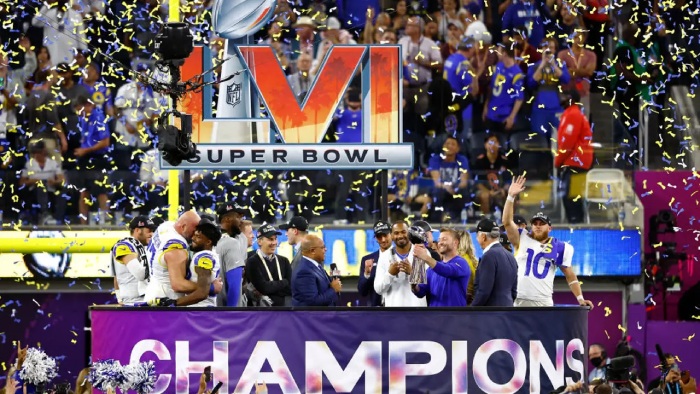 The Los Angeles Rams earned their share of the championship prize after winning the Super Bowl around two months ago.

At a ceremony in Los Angeles on Thursday night, the Rams’ Super Bowl LVI victory rings were presented to them.

The rings, which include a couple of palm trees atop the Rams emblem, have tops that can be taken off to expose the bowl of SoFi Stadium.

The team says that they are the heaviest sports championship rings in terms of carat weight. The rings include about 20 carats of white diamonds set on white and gold, and were created in partnership by the jewellery store Jason of Beverly Hills, Rams players, and team leadership, according to the club website. The 20-carat weight commemorates the formal opening of SoFi Stadium in 2020.

Jason of Beverly Hills CEO Jason Arasheben stated on the team website that “Most people don’t understand how immersed we become in the design process.” “We are passionate about understanding the team, the season, and the city. We spent an entire day at SoFi Stadium. The first thing I said was, ‘What can you get me from the game? The field? Ball? What else?’ I didn’t just want it to be historical in design, but have physical elements from the event as well. It all adds value and authenticity, creating a one-of-a-kind piece of memorabilia.”

The Rams, who represented Los Angeles, defeated the Cincinnati Bengals by a score of 23–20 in the Super Bowl five months ago. Although receiver Cooper Kupp took home the Super Bowl MVP award, many players on head coach Sean McVay’s team, including quarterback Matthew Stafford and defensive tackle Aaron Donald, had strong performances. It was also apparent that free agent Odell Beckham, who suffered an injury in the Super Bowl, was present to receive his ring. Also present was former Buffalo Bills pass rusher Von Miller.

On Thursday, Sept. 8, the Rams welcome the Buffalo Bills to SoFi Stadium to begin their Super Bowl defence and the whole 2022 season.