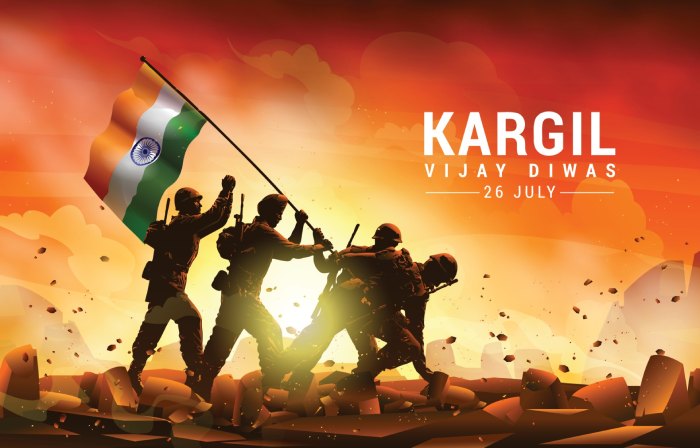 India celebrates Kargil Vijay Diwas on July 26 each year. The day honours the soldiers who gave their lives defending the nation in the 1999 Kargil conflict.

On this day, the valiant soldiers who heroically fought the Pakistani army in western Ladakh’s Dras, Kargil, and Batalik regions in 1999 are honoured.

India launched “Operation Vijay” to liberate the Kargil region, which Pakistani soldiers and terrorists had been illegitimately occupying on its side of the Line of Control (LoC).

The nation lost more than 500 soldiers during the Kargil War in 1999. From the conquered peaks in Kargil, the Indian soldiers drove the Pakistani troops—the majority of whom were drawn from the Northern Light Infantry of the neighbouring nation—back.

Kargil Vijay Diwas is held on July 16 to honour India’s win over Pakistan.

Relations between India and Pakistan remained strained after the 1971 war, but up until the Kargil War, the neighbours had refrained from hostilities. However, this looming conflict gained momentum during the 1990s as a result of rising tension and hostility brought on by separatist actions in Kashmir and other places.

Even before that, in February 1999, the two sides agreed to the Lahore Declaration in Lahore, which guaranteed a peaceful, bilateral resolution to all problems, including Kashmir.

However, during the winter of 1998–1999, sections of the Pakistani Armed Forces crossed the Line of Control and transported Pakistani troops and terrorists into Indian territory (LOC). Operation Badri was the cover name given to this.

The goal was to cut off the connection between Kashmir and Ladakh and diminish India’s military presence in the area. It was later established that Pakistan had intended to strike India with this deed.

India launched Operation Vijay in response to Pakistan. More than 2,000 000 troops were mobilised by New Delhi. The government made the decision to utilise air power during the Kargil War on May 25. Operation Safed Sagar was its secret name.

The Indian Navy strategically increased pressure on Pakistan through Operation Talwar while the Army and IAF were already in action. Throughout the war, the Navy patrolled the Pakistani coasts aggressively.

On July 26, the Kargil War was finally over after a protracted conflict. As a result of the removal of Pakistani intruders from their occupied positions, it was declared Kargil Vijay Diwas.