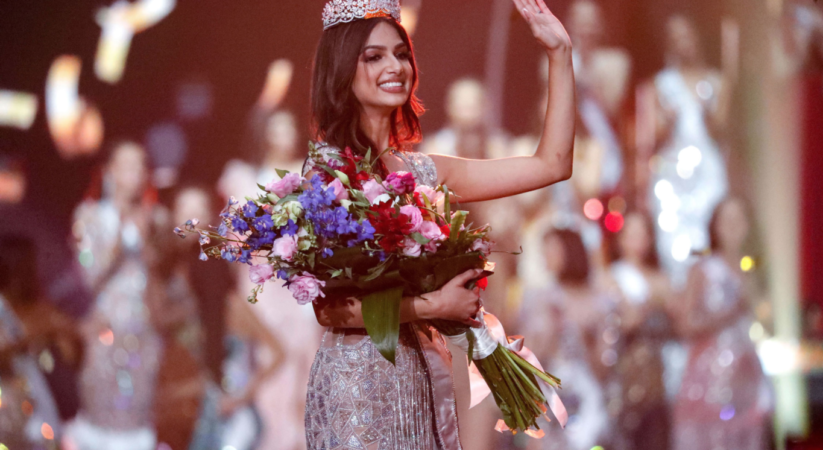 Harnaaz Sandhu of India was crowned Miss Universe for the 70th time, beating out a field of 80 contestants in a competition marred by politics and the pandemic.

To fit the primetime schedule in the United States, the contest was held in the middle of the night, ending at 5 a.m. (0300 GMT) on Monday.

Traditional displays of national costumes, swimwear, and a series of interview questions to assess participants’ public speaking skills were all part of the pageant. The top ten wore full-length gowns with elaborate beading in gold, silver, or bronze.

Beatrice Luigi Gomez of the Philippines wore an asymmetrical cut dress with one sleeve to show off a recent tattoo that she stated “celebrates her womanhood.”

In recent weeks, the competition has also attracted attention for other reasons, with numerous candidates opposing demands to boycott in favour of Palestinians.

Contestants were invited to shun the event to protest Israel’s treatment of Palestinians by a grassroots Palestinian-led boycott initiative.

“We urge all participants to withdraw, to avoid complicity in Israel’s apartheid regime and its violation of Palestinian human rights,” the Palestinian Campaign for Academic and Cultural Boycott of Israel wrote.

Only Indonesia and Malaysia, which do not have diplomatic relations with Israel, did not send a delegate, citing the global COVID-19 situation rather than Israel’s human rights record as the reason.

South Africa, which is a staunch supporter of the Palestinian cause, has withdrawn its support for the country’s representative due to her participation, alleging “atrocities committed by Israel against Palestinians.”

The United Arab Emirates, which normalised relations with Israel last year and welcomed Prime Minister Naftali Bennett on a historic visit on Sunday, did not send a candidate.

The UAE, on the other hand, said that this was due to “time constraints” in choosing its national winner.

The pageant’s contestants arrived in Israel late last month and have since toured the country, drawing criticism for cultural insensitivity.

The candidates wore robes with traditional Palestinian embroidery while rolling grape leaves at one stop in the Bedouin city of Rahat, which Gomez described as a “Day in the life of a Bedouin.”

The Bedouin are traditionally nomadic Palestinians who have long protested to the Israeli government about discrimination in housing and education.

In a recent interview, Meza asked candidates to keep politics out of the pageant, stating that the event was intended to bring women from various backgrounds together.

“When you are in there, you forget about politics, about your religion,” she said at the time to the Associated Press news agency.

The Israeli tourism ministry’s Sara Salansky said the country was chosen to host the competition earlier this year due of its successful coronavirus vaccination programs.

The advent of the Omicron variety, which forced Israel to close its borders to international tourists late last month, caused a last-minute glitch in the competition.

The majority of the Miss Universe contestants had already arrived in the nation when the new regulations took effect. Those who arrived later, however, were granted special permission to enter, subject to a 72-hour quarantine period.

All contestants were tested for the coronavirus every 48 hours in the days leading up to Sunday’s competition, and they were forced to wear masks.

Despite all of the precautions, Clemence Botino, a contestant from France, tested positive for COVID-19 shortly after landing in Israel. She was declared virus-free last week after ten days in quarantine and allowed to return to the competition.

Due to the epidemic, last year’s pageant was postponed, and Meza was crowned in May of this year for her abbreviated tenure.

Participants in the pageant, which Donald Trump co-owned before becoming US president, must be between the ages of 18 and 28 and not married or have children.