Saturday, 4 February 2023
You are here: Home In the United States, WhatsApp is launching cryptocurrency payments pilot 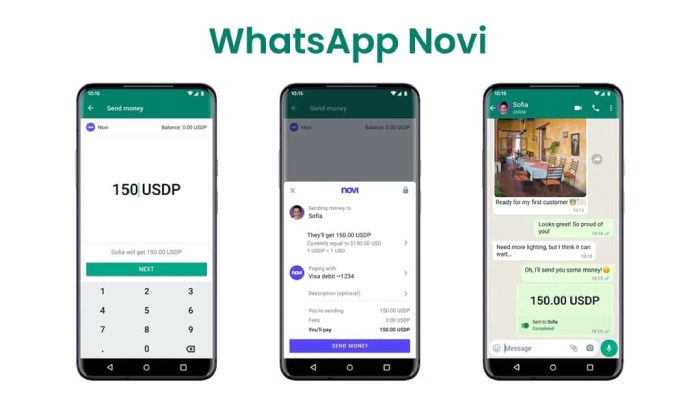 WhatsApp has introduced a new pilot that allows a “limited number” of individuals in the United States to send and receive money using cryptocurrencies from within a chat. Payments are done using Pax Dollars (USDP), a stablecoin pegged to the US dollar produced by Paxos, which is enabled by Novi, Meta’s digital wallet that started as a prototype six weeks ago. Novi’s new CEO Stephane Kasriel and WhatsApp’s Will Cathcart both publicised the announcement.

According to Novi’s website, sending a payment on WhatsApp works similarly to sending any other attachment. On Android, tap the paper clip icon, and on iOS, tap the Plus icon, then select “Payment” from the menu that appears. There are no fees for sending or receiving money, no limits on how often payments can be sent, and no fees for keeping a balance in your Novi account or withdrawing it to your bank account, according to Novi’s website. Payments are made in real time.

The Novi test was initially available in the United States and Guatemala, but according to WABetaInfo, users in Guatemala will not be able to utilise the new WhatsApp payment feature. They’ll have to stick with the standalone Novi app instead. End-to-end encryption, which is enabled by default for all personal conversations on WhatsApp, is unaffected by payments. Both English and Spanish versions of the WhatsApp Novi pilot are accessible.

The new pilot is based on Facebook’s (now Meta) much-hyped cryptocurrency ideas, which were unveiled in 2019. Facebook (as part of the Libra Association) planned to create and launch a cryptocurrency named Libra at the time, which would be tied to a basket of low-volatility assets rather than a single currency. Calibra, a Facebook-developed digital wallet, would be integrated with this. The entire system was created to provide a more cost-effective way to transmit money throughout the world than previous methods.

When announcing the beginning of the Novi pilot in October, Meta’s then-head of Novi, David Marcus, stated that the company is still committed to Diem. Marcus tweeted, “We intend to launch Novi with Diem once it receives regulatory approval,” Marcus tweeted. David Marcus subsequently said he was leaving the company at the end of the year. He has called the pilot of Novi in WhatsApp “the best farewell gift from the best team ever!”

While WhatsApp’s payment methods in the United States concentrate upon Novi and cryptocurrencies, it already accepts ordinary fiat dollars in other parts of the world. Last year, the feature was widely adopted in India, and it is now available in Brazil.